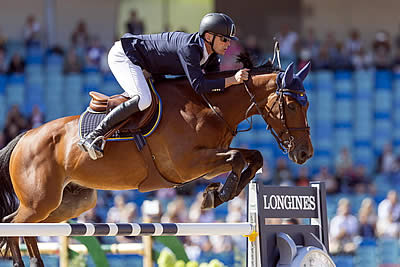 As if scripted to perfection, Sweden’s Rio Olympic individual silver medallists, Peder Fredricson (45) and the 11-year-old gelding H&M All In, galloped to victory on the opening day of Jumping at the FEI European Championships 2017 in Gothenburg (SWE).

However, it was the Swiss who gained the early advantage in the team event when brilliant rounds from Romain Duguet (Twentytwo des Biches) and Martin Fuchs (Clooney) were backed up by a breath-taking run from Steve Guerdat (Bianca) who slotted into fourth place individually at the of the day. Portugal’s Luciana Diniz (Fit for Fun) lies third and Germany’s Marcus Ehning (Pret a Tout) is in runner-up spot in the individual rankings. But as Fredricson said, there’s a long week of great sport ahead before the medals are decided.

“My plan was not to win today but to place in the top 10, but then I saw Marcus and I thought, ‘I want to beat him!’ Okay, I’m joking, but the main thing is that there are many days to go, and the most important thing is to have the horse jumping well for the rest of the week and not be too far back (in the standings). All In is a horse that has very big strides so it’s not difficult to take away strides with him and still have him jumping in a good way, so this course suited us very well.” — Peder Fredricson SWE

You couldn’t say that for many others, although Swiss pathfinder Nadja Peter Steiner (Saura de Fondcombe) was one of the very many to be clear all the way only to fall victim to the penultimate double, where the combination of a turn down the final line, bright red poles and strong shadows led to expensive poles on the ground. However, with the best three scores to count, her team-mates pulled it back so they hold pole position when the action resumes.

It’s incredibly close between the leading sides, the reigning Olympic team champions from France stalking the Swiss by a margin of just 1.63 after the results were calculated into penalty points, and the hosts from Sweden just 0.43 behind and shadowed by the Irish who are only 0.9 further adrift. The Spanish are a close fifth, followed by Austria, Germany, Belgium, Italy and then Portugal who lie tenth of the 17 competing nations.