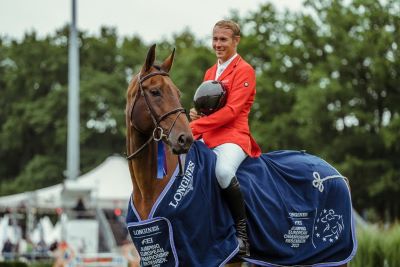 Team Sweden swept into the lead on the opening day of the Longines FEI Jumping European Championship 2021 at Riesenbeck, Germany, but the newly-crowned Olympic champions have only a narrow advantage over the host country, who in turn lie just ahead of Switzerland going into the first round of the team competition.

The beautiful big grass arena at the charming new venue created by multiple Olympian Ludger Beerbaum and his team provided the perfect backdrop to a great day of sport. And the hosts had plenty to cheer about when David Will was quickest around Frank Rothenberger’s 13-fence track for a German victory with C Vier in the opening Speed class.

Second-last to go, and chasing the target time set by Tokyo Olympic individual silver and team gold medallist Sweden’s Peder Fredricson riding Catch Me Not, Will shaved almost a second off that without seeming to turn a hair.

“My plan was not necessarily to win this class. I wanted to land a really good round and do everything right leading up to the next days, but of course winning is a very big plus so I couldn’t be happier for myself or my horse. His jumping was amazing; he made it easy for me, so the credit really belongs to him!” said the 33-year-old Will who is competing in his very first Championship.

Swedish pathfinders, Angelica Augustsson Zanotelli and Kalinka van de Nachtegaele, had a clear but relatively slow tour of the track to come home in 80.92 seconds. But when Rolf-Goran Bengtsson and Ermindo W broke the beam in 75.58, Douglas Lindelow and Casquo Blue stormed home in 73.59, and then Peder Fredricson produced his country’s fourth clear of the competition in 72.58, they clinched pole position in the team rankings when the top three scores were counted.

On top of that, Fredricson lies second and Lindelow third individually, with Olivier Robert from France in fourth with Vivaldi des Meneaux and defending individual champion Martin Fuchs from Switzerland in fifth with Leone Jei.

The German team looked compromised when Maurice Tebbel’s Don Diarado was withdrawn. “Of course it was bad for us that Maurice couldn’t ride, but this decision had to be made for the horse. But if you have Marcus Ehning as the fifth you are still pretty OK! We have a good team and a good team spirit; we are working well together and we’ll see where this leads us. I think we can be very happy with this start,” Will said.

Christian Kukuk’s Mumbai and Andre Thieme’s DSP Chakaria are not long back from Tokyo, but both German horses were looking great when slotting into tenth and 17th individually. The Swedes will be under plenty of pressure if they are to stay ahead of the home contingent. Although the Swiss were a little unlucky.

Anchorman Steve Guerdat looked on course for a really fast result with Albfuehren’s Maddox that could challenge for the lead but, coming down to the wall of planks at fence nine on a seven-stride distance, the stallion put down for an extra one at the last minute and ploughed through the timber. The pair cleared the finish in 71.96 which would have been the second-quickest time of the class, but the addition of four seconds for that mistake left them in 14th place instead, just behind Swiss team-mates Elian Baumann with Campari Z and Bryan Balsiger and AK’s Courage. Fuchs’ great fifth-place result was therefore pivotal at the end of the day.

The Netherlands lies fourth, France fifth, and the defending champions from Belgium are in sixth place. Belgian chances were undermined when, in what looked set to be another good round, Olivier Philippaerts’ Le Blue Diamond v’t Ruytershof did exactly the same thing as Guerdat’s stallion at the planks at fence nine.

At the post-competition press conference, Peder Fredricson said, “There was something about that fence that was a bit spooky. When my horse came in, he also had a little look at it – I showed it to him and he really didn’t like it but when he was up and going, he didn’t mind it!” he explained.

Commenting on the course in general, the Swedish star added, “It was really well built, quite welcoming for the horses – a nice start but with a few good questions, including the turn inside to the water and the two combinations at the end. He (Frank Rothenberger) did a really good job; most horses jumped well and confidently and still there were mistakes,” he pointed out.

Lindelow described his feeling after steering his 11-year-old gelding into third individually and helping to anchor his country’s team lead. He also talked about the temptation to try too hard where speed was so important. “It’s easy to get drawn in when the class is running so that you try to ride faster than you planned initially. But I think I stuck to my plan, and I’m very happy with the result, and with my horse,” he said.

He wasn’t the only one feeling pleased. “I’m pleased, relieved, a little bit proud, and a little bit honoured!” said event creator Ludger Beerbaum, who was anxious that everything went right at this first major fixture on his home turf. It’s less than a year since the Championship was allocated to his venue which has been rapidly developed since then.

“It’s my name up front but it’s definitely not all my achievement or glory; we have a great group of people: Karsten (Lütteken, Show Director) and the whole team at Riesenbeck International. You never really know when you do an event for the first time – are we really able to do this, are we competent enough, will the ground last, will we have a nice competition, especially in the speed class? You never know 100%. But I couldn’t be more pleased,” he said.