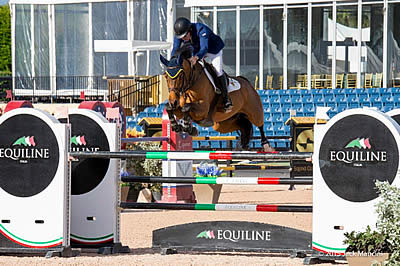 Wellington, FL – November 29, 2015 – In another brilliant effort, Conor Swail (IRL) concluded his season with back-to-back wins at Palm Beach International Equestrian Center (PBIEC) as he rode Cita to victory in the $34,000 1.45m Consolation Classic on the final day of the Holiday & Horses CSI 4* competition. Competition at PBIEC will resume Saturday, December 5, with the Equestrian Sport Productions Year-End Awards show.

Repeating a nearly flawless performance, Swail and Cita crossed the timers in 36.726 seconds to edge Ali Wolff (USA) and Brianda, who set a fast pace late in the jump-off order with a time of 36.868 seconds. Emanuel Andrade (VEN) and Nokia de Brekka finished the class in third place with a time of 37.707 seconds.

Making good on his word, Swail added yet another ranking class win to his record, celebrating his 24th FEI victory this season. With each of his three FEI horses performing consistently throughout the week, Swail tackled the day’s course, set by Anthony D’Ambrosio (USA), with the same ease and efficiency he displayed last night aboard Viva Colombia in the $212,000 Holiday & Horses Grand Prix CSI 4*. An original 40 entries contested the first round of the $34,000 1.45m Consolation Classic, with 13 combinations moving forward to the second round and seven pairs finishing the day with a double clear effort.

“It feels truly great to win two big FEI classes in a row. I have three great horses here this week. This one is still a bit new for us. She’s just nine and is by Casall. I think this is only her sixth or seventh show with me so far this year,” explained Swail. “She has a lot of quality, and I think she has really a lot to offer. I’m hoping that by the end of circuit this year, near April, she’ll be doing some of the bigger grand prix classes.”

There are high hopes for the 2006 Holsteiner mare (Casall x Vorr.) owned by Susan & Ariel Grange, who made her FEI debut with Swail in early September. Her raw athleticism and speed set her apart, adding another competitive edge to Swail’s string, which is based at Lothlorien Farm.

“I think she’s going to be really special. She’s unbelievably careful, and is just a feather off the ground. She really has a lot of blood, but just needs a bit more experience. It was really nice for her to run around and do a great job today,” he continued.

With a competitive line-up set for the jump-off, Swail knew that a win would not come easy, and a carefully planned but quick effort around the course would be needed to top the class. He commented, “It was a course where there was a lot more running than turning, and she actually felt a bit green to fence one and two. We did one more step than I had wanted, but she’s still very quick across the fences so I thought it would be okay if I kept a good rhythm and a nice high pace. Thankfully again, it was my day and I felt I did just enough for the win because Ali had a great round,” he remarked.

Piloting his second mount, Martha Louise, also owned by Susan & Ariel Grange, to a top ten finish, Swail concluded his final competition of the year on an incredibly positive note, as he believes the pieces are finally falling into place with the beginning of a new year approaching quickly.

“Martha had a lovely round today also. I felt like she was just a tad unlucky this week but jumped beautifully in all of the classes. It’s a great way to end as this is our last show of the year, and I’m so pleased that it went as well as it could have gone for us,” noted Swail. “I’m quite lucky that I have such a good group of horses around me now, and you know, Lothlorien is incredible. We have a few nice new ones coming up and are always looking for carefulness, blood, and quality. We try to find the good athletes, as that’s what you need in the sport today. I have great owners behind me and have a lot to look forward to as we move into another year. I think over the next few years, we’re going to create something really positive.”

For a full list of results, please visit www.pbiec.com.