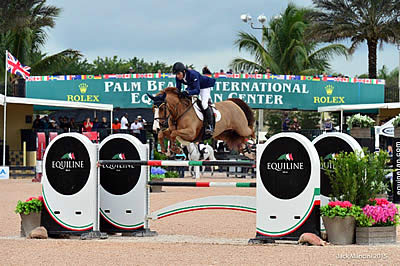 Swail and Martha Louise, a 2004 Swedish Warmblood mare (Maloubet de Pleville x Virginia Wolf) owned by Five Way Farm, LLC, displayed their prowess in the second round, edging notoriously fast jump-off riders Kenny and Derbyshire. According to Swail, Martha Louise has been knocking on the door for a win and he feels confident that the mare is entering WEF in top form.

“I just arrived back in the States last week and I had the plan to do Martha Louise and Rubens LS La Silla this week. We gave them both the class on Thursday and I thought the class today was very nice,” noted Swail. “Anthony [D’Ambrosio] did a good job as usual. It was a nice course and not huge, but I was very pleased with both of the horses. I think it was a great start for us.”

With 35 trips in the first round, Swail knew that a difficult task was ahead with nine combinations moving forward to the jump-off round, including his second mount, Rubens LS La Silla, owned by Vanessa Mannix, who finished in ninth place.

“I thought Darragh was very fast. I really had to hustle hard to beat him and I have to say everything happened the way that we wanted it too. She jumped very well, but it was one of those jump-offs where you couldn’t leave anything on the table,” he explained. “You couldn’t miss a step and thankfully she was very alert since she has not competed since November. It was fantastic.”

Martha Louise has come out strong in the past two months and Swail commented on her unflappable consistency, a quality that he says is invaluable entering the WEF season, as many of the world’s best competitors will test the International Ring at PBIEC throughout the 12-week circuit.

“Martha was off for quite a substantial period of time last year, but did very well towards the end of circuit. She actually jumped really well here in the Holiday & Horses CSI 4* and think she got cheated a bit because she didn’t get anything, but she was right there the whole time,” commented Swail.

A number of strong mounts in Swail’s string will be legging back up to begin their season in Wellington, FL, including Cita, Dillinger, and Grafton, but Swail made sure to note that Martha Louise will always be a go-to mount for him, especially as her dependency continues to show its worth.

“She’s got an incredibly big step and she turns very well. She has good experience now at this level. When you look at the class list I think she probably went into this class as one of the favorites and in that way it’s nice to know that she proved that she should be. She’s incredibly consistent,” he elaborated. “I’m very thankful to have Lothlorien Farm and the support of Sue and Ariel Grange. It’s a nice way to start off the year.”

Andrew Kocher of St. Louis, MO and Uppie De Lis, owned by BTS Entertainment & Sales, earned a well-deserved victory on Thursday, January 7, in the $10,000 Hendrick Brothers Construction 1.40m Open Stake. The duo finished as the fastest combination in the first round and continued that momentum into the jump-off, which saw as fifteen combinations test the fast track.

For more information on PBIEC, please visit www.pbiec.com to see a full schedule and list of results.