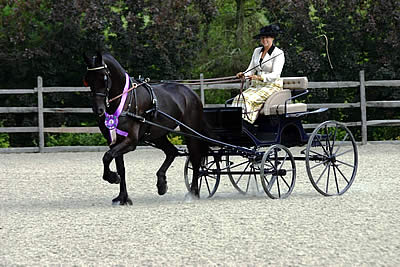 Coatsville, PA (September 24, 2014) – Dubbed “the queens of the Keuring” by the Friesian horse community, Iron Spring Farm’s Evita ISF and Crystal Burr’s Ivanka Nicole performed to crowning achievement in front of the able hands of trainer and driver, Suzy Stafford, at the September 18 FHANA Keuring hosted at Iron Spring Farm in Coatesville, PA.

In the Friesian horse community, the Keuring is an annual inspection of horses traditionally conducted by officials of the Dutch Friesian Studbook of The Netherlands.

The IBOP test is open to horses 4 years and older and its objective is to establish a horse’s suitability for various uses and to do so with the greatest degree of objectivity. The driven test consists of a dressage type pattern which includes walk, trot, extended trot and canter.

“I broke Evita to harness in May. She took to it quite well,” said Stafford. “Her kind, settled nature makes her ideal for driving. She has a magnificent trot, with suspension and swing to spare. It’s a pleasure working with Evita and the staff at Iron Spring. They are passionate about their breeding program and a professionally run facility, with quality horses, makes my job easier.”

Evita came into the Keuring with “provisional Crown” status, having impressed judges in 2012 when her lovely gaits and conformation were first presented in-hand. To complete Crown status, she needed 75 points or above in the IBOP Driven Performance test. The judges, wowed by, as Stafford described, “her magnificent trot,” scored her 80.5 overall, easily giving the mare the score she needed.

“Ivanka came to me specifically to prepare for the IBOP Performance test. She is breath-taking, with presence and power,” Stafford said. “I wanted her in the best physical shape possible. She is a big mare with huge gaits and power to burn. As a young horse, she was sometimes overwhelmed by her own natural ability so I took time to strengthen her on hills to be sure she could carry all her natural power. This gave her the security and confidence she needed to show off her gaits here.”

The judges reflected their high praise of the young mare’s canter, impulsion and balanced transitions with a score of 78.5. Stafford returned with her later the same day to take her from 2nd Premie to 1st Premie, and assuring her eligibility for Champion of the day as well as consideration for Crown Status.

After presenting her to the judges for a more discerning assessment of her trot in-hand work, they were impressed with her overall movement, conformation, elegance and power and agreed to Crowning her. “This is astonishing for such a young mare to achieve this honor,” said Stafford, who add that the mare will continue her training with the multiple World and National carriage driving champion, with the goal of earning the mare’s Driven Sport Predicate. 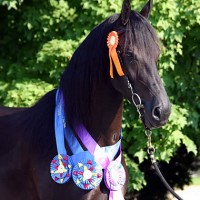 “I am excited to pursue a Sport Predicate Title in 2015 for Crystal and Ivanka. This mare loves to drive and I think we will all enjoy the journey! It gives me pleasure when an owner sees potential in their horse and is willing to give them all the opportunities they deserve to become a superstar.”

Stafford first stepped into the combined driving spotlight in 2004, becoming the youngest and first American driver to win individual Gold in an international driving competition, driving Bouncer to first place in the 2005 World Pony Driving Championships in England. Since then she has collected multiple World and National titles and remains deeply involved in her sport, training, competing and teaching students and holding clinics.

She operates Stafford Carriage Driving facility out of Chester County in Pennsylvania from April to December and in Ocala, Florida from January through April. To learn more, visit www.staffordcarriagedriving.com.