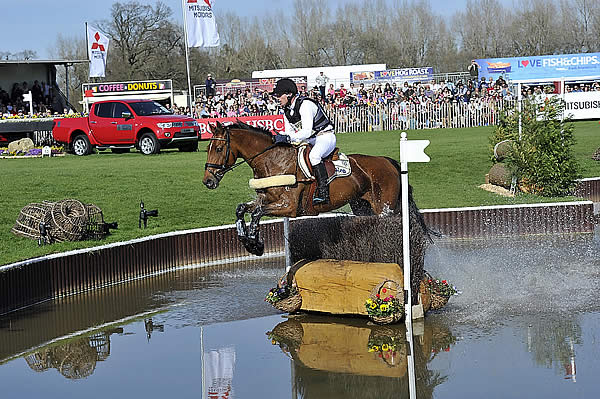 Lausanne (SUI), 5 May 2013 – The huge crowd at the Mitsubishi Motors Badminton Horse Trials (GBR), fourth leg of the HSBC FEI Classics, roared home Michael Jung (GER), cheering loudly at the finish of the Cross Country to show their appreciation of a true horseman.

However, although the Olympic, World and European champion has retained his lead on La Biosthetique Sam FBW after the first two phases, he will need all his famous reserves of calm tomorrow. He does not have a fence in hand over New Zealander Jock Paget, who was immaculate on Clifton Promise and lies in second place.

The two Rolex Grand Slam contenders, William Fox-Pitt (GBR) on Parklane Hawk and Andrew Nicholson (NZL) on Nereo, have moved into closer contention in third and fourth places, still separated by just 0.2 of a penalty after faultless performances.

Badminton is the world’s oldest and richest CCI4* and attracts more than 150,000 spectators on Cross Country day, the most 30-year-old Jung has encountered in his career so far. “There are so many people here and they lift you over the fences,” he said happily. “The atmosphere is fantastic. I have wanted to come here since I was a young boy, so to be in this position feels amazing.”

Jung, who had a refusal at the skinny brush at the top of the Savills’ Staircase (fence 22) on his first ride Leopin, also had a nervous moment on Sam. The 13-year-old gelding twisted over the imposing timber into Badminton’s famous Lake (fence 9) and landed facing in the wrong direction for the two small brush fences which came next, with Jung close to completely losing his reins.

The crowd gasped loudly, but somehow Jung, showing amazingly quick reactions, managed to set his horse back on track. “I gave him time to find his balance again and it was fine,” he said, apparently not at all fazed by this near miss.

The pair finished 14 seconds inside the optimum time of 11 minutes 13 seconds, despite taking a long route at the Staircase this time.

Jung’s Olympic team mate Sandra Auffarth was equally impressive on her Badminton debut and she is now in fifth place on Opgun Louvo, having added just 1.2 time penalties.

Stefano Breccarioli (ITA) produced the ride of his life on the elegant Apollo VD Wendi Kurt Hoeve, having clearly benefited from the advice of his mentor Andrew Nicholson, and he is now in sixth place with six time penalties, his best Cross Country result at CCI4* level.

“I am very happy,” said Brecciaroli excitedly afterwards. “I was trying very hard. The competition is so exciting, and the atmosphere fantastic. I’m feeling very proud to be at the top of the leaderboard with Olympic champions.”

Sam Griffiths (AUS) has moved up three places to seventh, ahead of Nicholson on Avebury, the only rider with two horses in the top 12.

Hugh Thomas’s Cross Country course jumped exceptionally well, with 69 clear rounds and more than 25% of the field – 25 riders – finishing inside the optimum time thanks to the perfect going.

“The ground is superb and the course felt lovely to ride,” said Nicholson, who coped with the hazard of being chased by two different dogs during his round on Avebury. “It helped sharpen Avebury up. He probably thought I’d arranged it on purpose!” he joked.

Not everyone made the track look quite so easy, however, and there were some high-profile mistakes. Kristina Cook (GBR) gave notice that the new HSBC Market Place complex (fence 21) would be influential when Du Novo News ran out at the second open corner, and William Fox-Pitt with first ride Oslo and Mark Todd (Ravenstar) also had problems here.

Dirk Schrade (GER), third after Dressage on King Artus, retired when the horse refused at the rails into the Lake (fence 9), while fellow Germany Kai Rüder (Le Prince des Bois) and Britain’s Zara Phillips (High Kingdom) both ran past one of the small brush fences in the Lake.

The latter seems to be perpetually unlucky at Badminton and is yet to better her 16th place in 2008. “I made a mistake and you pay the price,” Phillips said. “It’s frustrating after all the hard work, but he’s such a great horse.”

Pippa Funnell, who had done such a fantastic job to bring Redesigned back to top level after three years on the sidelines, had an even more frustrating run-out, at the top of the Savills Staircase. It cost her fifth place at this stage.

Susanna Bordone (ITA) was unseated when Blue Moss hit the rails going into the Shogun Hollow (fence 18) and Bettina Hoy (GER) was unshipped when Lanfranco TSF twisted over the final element of Huntsman’s Close (fence 7).

Mary King (GBR) continued unawares after Kings Temptress took out the flag at the open corner at the Rodney Powell Products Farmyard (fence 13), but the Ground Jury reviewed the CCTV footage and decided that she had not jumped between the flags so she was stopped.

William Fox-Pitt, who timed his Cross Country round to perfection on Parklane Hawk, finishing one second inside the optimum time after opting for a cautious route at fence 21 this time, conceded that he may be facing an uphill task in his pursuit of Grand Slam glory in tomorrow’s Jumping phase.

“There’s no way it’s going to be a normal day at Badminton with so much at stake,” he said cheerfully. “Even if I jump clear on Parklane Hawk – and that certainly isn’t guaranteed – I’m still relying on others to make mistakes, and that isn’t very likely either. Especially as this chap [Michael Jung] doesn’t make many!”

Don’t miss a hoofbeat. Follow the live action on www.feitv.org.