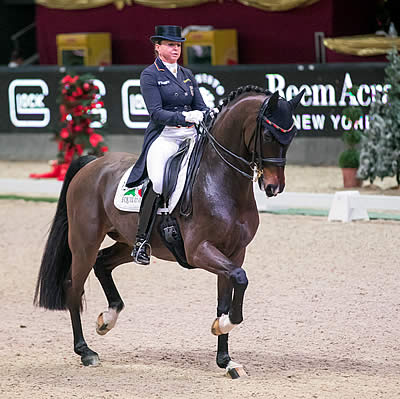 Salzburg (AUT), 11 December 2016 – Germany’s Dorothee Schneider and Showtime FRH were convincing winners of the fourth leg of the FEI World Cup™ Dressage 2016/2017 Western European League at Salzburg in Austria. From a starting field of 13, the world no. 3 and Rio 2016 Olympic Games gold-medal-winning partnership finished more than five full percentage points ahead of runners-up Severo Jesus Jurado Lopez and Lorenzo from Spain. And on another really strong day for the German contingent, it was Jessica von Bredow-Werndl who slotted into third place with Unee BB ahead of compatriot Fabienne Lutkemeier and D’Agostini FRH in fourth.

Australia’s Kristy Oatley and Du Soleil held the advantage going into the judging break on a score of 76.998, and her sixth-place finish at the end of the day has moved her up to the top of the League leaderboard, ahead of Lutkemeier, going into the fifth leg at London Olympia (GBR) this week.

However, 47-year-old Schneider and her 10-year-old gelding set a whole new standard when posting 85.292 for a fabulous test when fifth-last to go. Jurado Lopez achieved the only other over-80 percent score, his 10-year-old gelding swaggering to the strains of Santana during an exuberant performance that earned a mark of 80.273. The fresh Austrian air seemed to add an extra spring to the step of several of the horses and the Spaniard didn’t showcase his trademark one-handed final centreline, while third-placed von Bredow-Werndl admitted that her 16-year-old stallion was also feeling “a bit cheeky” on his first outing in eight months when scoring 79.275.

But despite the fact that this was Showtime’s first start since the Games in August, Schneider and her lovely gelding were in a league of their own. “It’s the same Freestyle as Rio; we started doing it in May this year and it’s very perfect for this horse!” said the German rider who believes Showtime has even more to give. “He’s young and needs a little bit more power, but he has so much rhythm and energy and I know we can improve,” she said.

The FEI World Cup™ Dressage 2017 Final in Omaha, Nebraska (USA) next March is her target, but earning one of the three slots available to German riders is no simple task. “I hope to compete in Amsterdam (NED) and Neumunster (GER) and we just have to see how it works out,” she said.

Dorothee Schneider GER (1st): “Showtime was a bit sensitive in the arena today but he worked very well.”

Jessica von Bredow-Werndl GER (3rd):  “The last time we competed was in Aachen, my horse has had a holiday since then and I could feel the fact that he had the break; he was trying to take the lead but overall I’m happy. And this event takes place very close to my home so it’s always special to compete here. My plan is to compete in Amsterdam with the horse I rode in Lyon (Zaire-E) and to go to Gothenburg with Unee – then we will see which of the horses have qualified and which I can take to Final.”