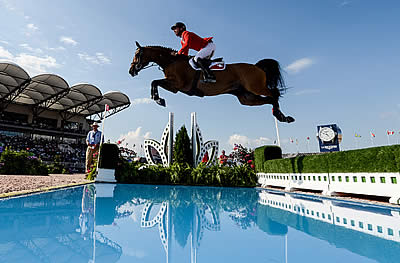 A brilliant round from Steve Guerdat (36) and the fiery mare Bianca put the 2012 Olympic champion and Team Switzerland into pole position as the Bank of America Jumping Championship got underway at the FEI World Equestrian Games™ 2018 in Tryon, USA. A colourful, testing but honest 14-fence track built by Irishman Alan Wade created spectacular sport for spectators and the 124 horse-and-rider combinations from 49 nations.

The defending world champions from The Netherlands jumped into second ahead of Brazil in third and USA in fourth. But the biggest story of the day was the stunning performance of the Australians who slotted into fifth and whose final rider, Rowan Willis (38), is lying individually third behind Brazil’s Pedro Veniss (35) in silver medal position and Guerdat at the top of the leaderboard.

Guerdat was second-last to go and raced into the lead in the individual rankings when clear in 76.33.

“It was a long day waiting; we walked the course before 9am and it was nine hours later when I got on my horse, but I was kind of confident because the course walked well. The fastest horses were not leading so I thought if I stick to my plan, I had a good chance to be in the top three today, so I actually really enjoyed my round and I can’t ask for much more!” — Steve Guerdat (SUI)

Veniss and his fabulous stallion Quabri de l’Isle were poetry in motion, their tight turn to the third-last fence ensuring they were really competitive against the clock as they cruised through the finish in 76.68 seconds. And Willis and his chestnut mare Blue Movie were only 0.27 seconds slower through the timers.

“She just tries so hard for me. I don’t worry about trying to go fast because she’s naturally fast, so I just have to keep my rhythm and make sure I don’t make a mistake. It was a nice day. All four of us have just got off to a brilliant start and that’s really encouraging.”

“Obviously it’s not easy for our team because half of us are based in Australia so it’s a long way to go to any shows, but those boys (Jamie Kermond and Billy Raymont) have had a good summer in Europe and Scott (Keach) and I have had a good summer over here (in North America) and it’s just brilliant that we all had a good day today. This is something I’ve dreamed of. It’s the first time I’ve represented Australia since I was about 18 at an invitational in Hong Kong!” — Rowan Willis (AUS)

The British-based rider who hails from Armidale in New South Wales made a big impression when finishing 11th in the Grand Prix at the Masters in Spruce Meadows (CAN) earlier this month.

Swiss supremacy was underpinned by great rounds from Martin Fuchs (26), who lies individually fifth behind Germany’s Marcus Ehning, and Janika Sprunger (31) who is in 16th place with Bacardi VDL. “The course suited Clooney really well. I knew I could do it and I’m glad it worked out so well. Werner (Muff) had two down so the pressure is on Steve now, but we all know that he handles pressure better than anyone else!” Fuchs said before Guerdat proved that this is absolutely true.

Sprunger was Swiss pathfinder. “I had to concentrate to open this well for my team and give confidence to myself and the rest of the others, and I know that Bacardi and I are not the fastest combination, so we just try to go as quickly as possible. Maybe a half-second or one second faster was possible but I’m very happy with the end result. I said I wanted to be on 80 seconds and we almost did it!” she said after stopping the clock on 80.26 seconds.

With only a fence separating the top three countries and less than two separating the top 10, it’s all to play for again when the action resumes with Team Belgium first into the ring ahead of Ireland, Japan, Portugal, New Zealand, Canada, Chile, Germany, USA, and Mexico. Egypt will be next to go and then Venezuela, Sweden, Netherlands, France, Hungary, Australia, Brazil, and Great Britain will take their turn. Team Colombia has been drawn ahead of the Swiss and they will be followed by Argentina, Spain, and Italy so the last team into the arena will be Israel.