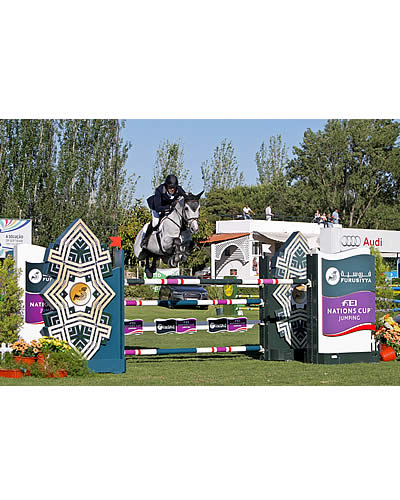 Lisbon (POR), 29 May 2015 – In a competition of wildly fluctuating fortunes for many of the nine competing nations, the Furusiyya FEI Nations Cup™ Jumping 2015 Europe Division 2 League leg at Lisbon, Portugal was won by a rock-solid performance from the Spanish team tonight. And, to the delight of the home crowd, the Portuguese produced a much-improved second round to clinch runner-up spot and maximum points towards qualification for the Furusiyya 2015 Final.

The clock gave France the nod over Belgium for third place when the two sides finished on level pegging, while Team USA lined up fifth ahead of Ireland in sixth and Great Britain in seventh place. Finland filled eighth spot, withdrawing in the second round after elimination for their second-line partnership Mikko Maentausta and For Success, but still guaranteed 90 qualifying points as one of just two countries hunting for points in today’s leg of the series. Having collected 16 faults in the first round, Team Italy sat it out on the sidelines when only eight nations returned for the second round.

The Spanish established their superiority with three first-round clears from Alberto Marquez Galobardes (Belcanto Z), Gerardo Menendez Mieres (Cassino DC) and Ivan Serrano Saenz (Condor). But perhaps typifying the whole concept of the Furusiyya FEI Nations Cup™, with its layers of competition that guide young, developing riders onto the ladder of success as part of a team, it was a great second round from Laura Roquet Puignero that clinched it and left Saenz with no reason to return to the ring for a second time.

Both Roquet Puignero and Menendez Mieres experienced their Nations Cup debut which made it all the more creditable that the latter produced one of just two double-clears on the day. But Roquet Puignero’s improvement from a 16-fault first effort to leave just the middle element of the Longines triple combination on the floor second time out was also remarkable.

The 12-fence track designed by Brazil’s Guilherme Jorge jumped very differently for many of the horse-and-rider combinations over the two rounds. One of the most surprising elements of the competition was the fact that so many of those who went well first time out really struggled at their second attempt. The two-hour interval between the first round in daylight, and the second under lights, created a completely different environment. As Roquet Puignero explained afterwards, “a lot of horses were very spooky about the lights in the second round, and there was a lot more tension for the riders at that stage.”

The Portuguese were languishing in sixth place at the halfway point carrying eight faults, while the French lay ahead of them with five and Great Britain, the USA and Ireland shared second spot with four faults apiece. But they mainly lost their grip as the second round progressed, the French faring best of the leading bunch when adding nine to their tally, and the Belgians doing really well when adding just one time fault to their first-round 13, but leaving it all too late to make any real impression.

The Portuguese got off to a flying start in round two when Mario Wilson Fernandes produced the second part of a double-clear with Abanderado MZ and Joao Pedro Gomes was also fault-free with Electra S. But their rapid improvement ground to a halt when Luis Ferreira’s Quechua d’Emeraude ducked out twice at the middle element of the Longines triple combination for elimination. It was left to anchorman, Luis Sabino Goncalves, to save the day, and it seemed very possible that he might even force the Spanish to a jump-off if their last rider faulted, as mistakes from Marquez Galobardes and Roquet Puignero moved the leaders onto an eight-fault total. However, although Sabino Goncalves brought Uching Imperio Egipico home with all the timber intact, he collected a single time fault to move his country onto a final total of nine faults, good enough for second place but allowing Spain’s Serrano Saenz the luxury of not having to come back into the ring.

“The course was beautiful to ride,” said Menendez Mieres whose lovely 10-year-old grey, Cassino DC, produced that critical double-clear for the winning side. Course designer, Jorge, talked about the challenge he set. “The first round was a bit easy but we decided to raise only two fences (in the second round) as the lights change things a bit as well. On top of that, we felt it was important to put a bit of pressure on the riders, so it was the right decision. The time allowed (79 seconds) was totally different from the first round to the second – I wish I had set 76 or 77 seconds in the first round, but the 79 was absolutely perfect for the second round,” he pointed out.

Laura Roquet Puignero said the winning team was “surprised, but very happy tonight!” She said her horse “was very naughty in the first round, he was a bit fresh and not so concentrated but in the second round he was a little more tired and much more calm. I’m so happy with him. I broke him when he was four and we are together now for six years – we have learned a lot together!” said the 25-year-old from Barcelona.

Tonight’s result has promoted Portugal to third place in the Europe Division 2 standings while Finland has forged further ahead at the top of the League table with Ukraine lying second going into the fourth leg at Sopot, Poland next Friday.

Next week there are two legs of the series taking place. St Gallen, Switzerland hosts the fourth leg of the Europe Division 1 League while Sopot in Poland will present the fourth leg of Europe Division 2. For details of the Swiss fixture, visit www.csio.ch or contact Press Officer Roman Gasser, Email roman.gasser@csio.ch or Tel +41 79 635 5005. For details of the Polish fixture, visit www.csio.sopot.pl or contact Press Officer Agnieszka Bilda, Email agnieszka.bilda@czerwonafurtka.pl, Tel +48 531 208050.

9 nations fielded teams, with two – Finland and Portugal – chasing points towards the Furusiyya 2015 Final in Barcelona, Spain from 24-27 September.

12 horse-and-rider combinations jumped clear in the first round.

8 of the nine teams returned for the second round, and it was Team Italy that missed out, having collected 16 faults in round one to finish in ninth place.

Gerardo Menendez Mieres ESP: “I am very happy today with the victory above all. On top of that, today I competed in my first Nations Cup™ which brings me a great sense of joy and satisfaction.”

Laura Roquet Puignero ESP: “This show is amazing – a lot of people and a big atmosphere under the lights!”

Alberto Marques Galobardes ESP: “I didn’t think too much about the pressure of jumping out there. When you are in the warm-up, your focus is on getting in the arena and doing the best you can. You really just want to go out there, jump and hope you come out with a good result.”

Guilherme Jorge (Course Designer): “For me as a course designer, it is a real honour and privilege to come to a show that is running its 95th edition. I have a very good crew with me which makes all the difference. It is a very nice ring and a great show overall. It’s very special to have a show that has grass footing and takes place under floodlights as well; the public is also fantastic.”