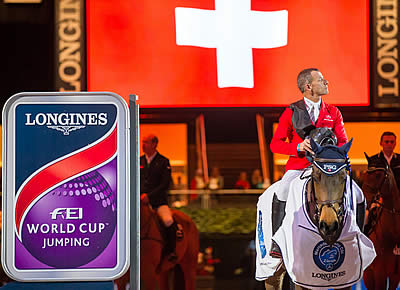 Zurich (SUI), 31 January 2016 – Pius Schwizer and PSG Future set the Hallenstadion in Zurich (SUI) alight this afternoon when snatching a thrilling last-to-go victory for the host nation in the penultimate leg of the Longines FEI World Cup™ Jumping 2015/2016 Western European League. Only nine of the 39 starters found the key to the tough first-round track set by Swiss course designer Gerard Lachat, and Ireland’s Denis Lynch claimed his second runner-up finishing spot in a row with All Star, while Australia’s Edwina Alexander lined up third with Caretina de Joter.

Today’s result has seriously boosted Lynch’s position on the Western European League leaderboard, with 17 points rocketing him up to 13th spot. Now with a total of 34 points, the Irishman is well within sight of a top-18 qualifying spot for the Final which will take place in Gothenburg (SWE) from 23-28 March. As it stands today it looks like riders with points in the mid-30s should book their ticket to the Swedish fixture.

Schwizer, however, still has some work to do if he is to make the cut. Today’s maximum 20 points still only leave him on a total of 24. So the man who has stood on the Final podium on so many previous occasions, but who has never laid claim to the coveted Longines FEI World Cup™ trophy, will be doing serious battle at the last qualifying leg in Bordeaux (FRA) next Saturday.

The bogey fences on the 13-obstacle first-round course were the Longines triple combination at fence seven (oxer, vertical, oxer), the tall white planks at fence nine and the double that consisted of a vertical to an oxer at fence 11. Lachat could be forgiven for being a bit un-nerved, however, when the host country’s Martin Fuchs got the action underway with a clear from Clooney and then, fourth to go, the young German, Niklas Krieg who created a sensation when winning the previous leg in Leipzig (GER), followed suit. However, although five of the first 20 horse-and-rider combinations left all the poles in place, only four more would join them at the end of the first round.

And the jump-off was a cracker, with the excitement sizzling all the way to the very end.

Fuchs and Clooney led the way against the clock, but both the white planks and the double were still in place, and they continued to influence the result. The planks were now the third fence on the track, and Fuchs kicked them out to set the target at four faults in 41.92 seconds.

On the sporting map

Then Krieg set off with Carella, the much-loved 11-year-old mare with which he put himself firmly on the sporting map two weeks ago. But he had used up all his luck when tapping several poles in the first round, and when he hit the new vertical at fence 15 he broke the beam in 41.78 seconds to take over the lead, but only temporarily.

He was still out in front when Italy’s Piergiorgio Bucci and Cassalo Z ran into double-trouble four fences from home, but Michael Whitaker then re-set the parameters with Viking who hit the first element of the double but scorched home with a breathtaking run in 39.89 seconds.

Right out in front

Belgium’s Niels Bruynseels and Cas de Liberte fell victim to the bogey planks in a slower time, so Edwina Alexander’s clear with Caretina de Joter put her right out in front, but she knew she had been cautious.

“I realised there was no clear when I was going in, but that there were quite a few fast ones coming behind me. I hadn’t tested Caretina going really fast yet – we also tried a new bit today so I was trying for a nice clear. I was too slow already at the first fence and I didn’t get a great turn-back to the vertical (second fence) so I think I did right thing,” she explained afterwards.

Crossing the line in 45.31 seconds she had indeed left the door open, although three-time winner this season and runaway leader of the Western European League table, Germany’s Christian Ahlmann, couldn’t take advantage when dropping the dreaded planks with Epleaser van T Heike when third-last to go.

Lynch also knows that his 13-year-old All Star is not the fastest horse on the planet but he jumps big and clean and he’s been in the form of his life over the last few weeks. Setting off with complete determination the pair stormed home without fault in 42.34 seconds to set another new target and put it right up to Schwizer as the final competitor.

But the 53-year-old Swiss is a man who knows how to handle pressure, and although he rattled both elements of the double en route, he blasted through the finish in 41.97 seconds to settle the matter. This was his second FEI World Cup™ victory at Zurich, previously topping the line-up in 2014 with Toulago. He admitted afterwards that he was very hungry for success today.

“Future was already good here in Zurich on Friday, and today everything fell in place for a win but of course you have to bring it home and that’s not easy. I really wanted the win and not to finish second or third because I wanted to do well in front of my home people here in Switzerland,” he said.

There were all sorts of emotions in the air at the post-competition press conference. For one man the closing of today’s competition marked the end of a very successful era. “This is my last CSI as Sports Director,” said Rolf Theiler who has led the Zurich sports team in creating a fantastic event for the last 28 years, “and the biggest gift I could possibly ask for was a win for Pius today and Martin (Fuchs) taking the Leading Rider of the Tournament – I’m very happy!”

Bordeaux (FRA) will host the eleventh and last qualifying round on Saturday 6 February. For details of the French fixture, visit www.jumping-bordeaux.com or contact Press Officer Pascal Renauldon, info@rbpresse.com, +33 (6) 08 75 94 07.

The Hallenstadion in Zurich, Switzerland was the venue for the penultimate leg of the Longines FEI World Cup™ Jumping 2015/2016 Western European League today.

The home crowd had plenty to shout about when Switzerland’s Pius Schwizer galloped to victory with PSG when last to go in the nine-horse second-round jump-off against the clock.

The time-allowed in the first round was 68 seconds.

Denmark’s Thomas Sandgaard and Amarone missed out on a place in the jump-off when picking up a single first-round time penalty.

A total of 39 horse-and-rider combinations started in today’s competition, with Olympic champion Steve Guerdat heading up the nine-strong Swiss contingent.

Runner-up was Ireland’s Denis Lynch and All Star who also finished second at the previous leg of the series in Leipzig, Germany two weeks ago.

There were were three double-clear performances.

The fastest time in the jump-off was set by Britain’s Michael Whitaker and Viking who crossed the line in 39.89 seconds but left a pole on the floor to finish in fourth place.

The last qualifying round of the Longines FEI World Cup™ Jumping 2015/2016 Western European League will take place in Bordeaux (FRA) next Saturday, 6 February.

John Roche, FEI Jumping Director: “I’d like to congratulate Gerard (Lachat, course designer) for creating fantastic sport. And on behalf of the FEI I’d like to congratulate Zurich, and in particular Rolf Theiler and his team, for producing another outstanding event. Special thanks go to Longines, Mercedes and all the other sponsors as well.”

Edwina Tops-Alexander AUS (3rd): “I got Caretina from Pius and I’m really fortunate to have such a nice horse. Pius did a great job with her and Cameron Hanley also before that. I’m very lucky to have that type of horse at this stage of my career. There was a time when I might have found a horse like that difficult to ride.”

Denis Lynch IRL (2nd): “Going to the Final is not really my goal. I’m trying to win another spot for Ireland at the Olympic Games. Bertram (Allen) looks like securing one place and I’m hoping to secure another one. If I can do that with good runs in this World Cup series then that’s great, and I’m hoping to pick up more points in Bordeaux next weekend.”

Gerard Lachat, Course Designer: “I was a little nervous when there were a lot of clear rounds at the beginning but I was quite happy after the jump-off – everything went well; it was tough but it worked out perfectly in the end!”

Edwina Tops-Alexander AUS (3rd), talking about potential to qualify for the Longines FEI World Cup™ Jumping 2016 Final: “I won a Mercedes here in Zurich in 2008 and I still have it! It’s not easy being Australian to get some invitations (to shows) and I’ve only 19 points so far but I’ll go to Bordeaux now and see what happens!”