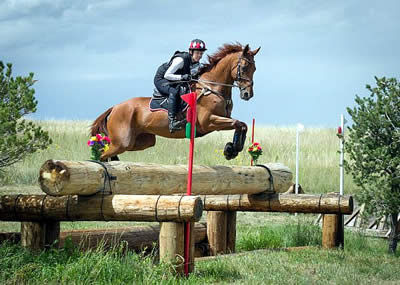 Cooke, who practices law in Dallas, and her horse Patent Pending maintained their dressage score of 52.80. The big liver chestnut Thoroughbred marched around the 25-obstacle, 4,781m course without penalty in a time of 8:34. The optimum time was set at 8:42.

Cliver and My Mitch also remained on top over the competition after a fantastic cross-country effort. The pair was only 6 seconds off the optimum time and held on to their leading score of 45.90 and completed the 24 jumping efforts without incident. Cliver trains with Mike Huber and Heather Morris of Gold Chip Farm.

“There wasn’t anything on the course that had me too worried,” said Cliver. “We ended up having a pretty scary ride at the up bank. I should have done five strides but I ended up doing six. That was our only hairy moment; other than that it was a lot of fun. I had just done a two star but this was my first CCI. I wasn’t sure how he’d finish at the end and he came off and was ready to go back in five seconds!”

Hayley Clark from Garden City, MO and her 15.3 hand consistent partner Bold Impression also enjoyed a successful day out in the wide-open spaces of the beautiful cross-country course at the Colorado Horse Park. They will carry their score of 33.20 from their dressage test into the show jumping phase on Sunday.

“He was awesome today,” said Clark. “He is always great cross-country. If I say go, he goes. I rode really well into the second water – I sat down, widened my hands and he went. He’s pretty strong in all three phases. Show jumping is probably our weakest phase. Tomorrow we just have to keep all the rails up!”

“We’ve worked very hard on his front end,” Clark said. “We’ve done a lot of grid work. I got him two years ago. He came from a dressage barn. He didn’t know how to go out in the field or what a cross-country jump was. Once he got it, he loved it.”

Clark plans to step him up to preliminary at the end of this year. Then she’s going to Florida this winter and hopes to do her first one star and go to the North American Junior and Young Riders Championships next year.

Amy Dalrymple from Eagle, Colorado and her own Triton’s Echo, a Connemara/Oldenburg cross, remain in strong contention advancing to the show jumping with no penalties added after cross-country and carrying 32.00.

Dalrymple, who trains with Sophie Mueller, hopes to step her up to training level.

“I was really happy to be first after dressage yesterday,” Dalrymple said. “It has only happened once before. That had always been our weakness. She’s come a long way.”

Dalrymple has really enjoyed her experience at the Colorado Horse Park.

“It has been great,” she said. “The whole show makes you feel like you’re at Rolex.”

Bonner Carpenter from Dallas and her own Basco, a bay Dutch Warmblood gelding, are still in the lead after cross-country in the Open Intermediate Division.

“He’s been really good all weekend,” said Bonner. “I couldn’t ask for him to be much better than he’s been. He is the strongest in dressage or show jumping.”

Bonner, who trains with Mike Huber and Heather Morris, is headed to California to compete at several three-stars and then the three-star at Galway in November.

Heather Morris from Lewisville, Texas and Laker, owned by Mike Huber, were in the lead going into cross-country but had a stop on the course.

“This is his first prelim so he just had a green moment,” said Morris. “I’m not worried about it. It’s one of those things that happen when they first move up. It’s not a big deal.”

Morris is very proud of her clients from Gold Chip Farm.

“I am feeling good about my group,” she said. “Everyone stepped up and had good rounds today. I’m proud of each and every one of them.”

“Actually it was really fun,” said Atkinson. “The horse is a catch-ride. Dan asked me to ride him and he’s a really nice horse. He was fun to ride.”

“My own upper level horse was injured at Rebecca Farm,” shared Atkinson. “He was my hopeful for the Pan American Games next year. So, we’re thinking to make a push to get Dan’s horse there. He’s certainly has the kind of quality to do the job. So, this may be the beginning of a very cool relationship. We’ll see.”

Atkinson is the cross-country course designer of the event and he asked to make a comment about the competing on the course he has built.

“At the FEI levels you’re not allowed to ride your own course. The reason it’s allowed at the national levels is because if course designers aren’t allowed to ride, then course designers will be people that don’t ride,” he explained. “Honestly, working on the course in the past four days I’ve probably had a total of six hours sleep. I’m out here aerating the footing until four in the morning every morning then I’m back out here at five getting things ready. I am probably the least focused person when it comes to riding. It also helps to really know the footing to get out there and gallop a horse. You just don’t get that by kicking the footing around with your foot.”

VS has not been reported at the Colorado Horse Park, however all horses competing are required to have a health certificate dated 3-5 days before arrival stating that the horse is VS free. All horses will be checked by a veterinarian upon arrival. Please enter the Horse Park by the main entrance on Bayou Gulch Road.