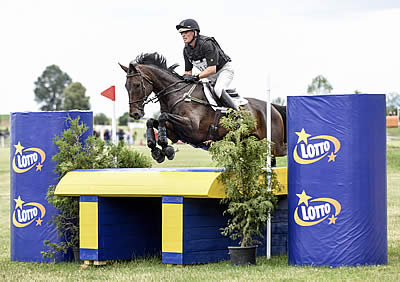 Strzegom, Poland, June 24: Over 400 horses on the startlists, 10 cross-country courses, riders from the top of the FEI rankings, and an exciting rivalry for the Nations Cup – LOTTO Strzegom Horse Trials starts on Thursday at the hippodrome in Morawa.

Athletes from 22 countries will compete over 4 days in 12 classes of various difficulty levels, including the Nations Cup class, the highest ranked eventing competition in Poland. The Nations Cup competitions started in May in Great Britain, and Strzegom will be the 3rd leg of the classification. Currently in the lead is the team from Sweden.

A record-breaking number of over 400 horses have been entered to compete in Strzegom. “The cross-country trials are looking to be record-breaking as well,” said Marcin Konarski, the chairman of the organising committee. The cross-country tests will be played out over three days. For the first time, athletes will compete at 10 tracks over 37 kilometres long collectively, with over 200 fences measuring up to 120 cm.

The audiences will have the opportunity to see top international riders, including 7 from the top 50 of the International Equestrian Federation rankings, such as multimedallist Michael Jung (GER), the current and two-time Olympic champion, or Andrew Hoy (AUS), silver medallist of the Olympic Games and three-time team Olympic champion. The best Polish riders will also compete at the event, including the current National Champion Paweł Spisak, or riders that have recently won the Olympic qualifier class in Baborówko.

Apart from the sport programme, audiences will have the chance to see exciting equestrian shows. The organisers also invite all to the exhibitors’ area with “Polska smakuje” and local group “Szlakiem granitu,” where there will be a chance to taste and buy top quality products by Polish vendors.