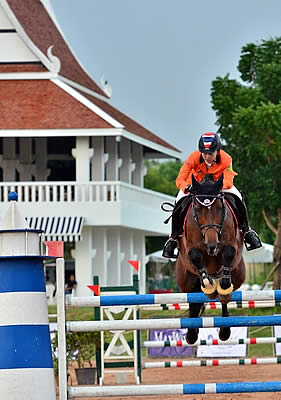 Lausanne (SUI), 3 March 2015 – Horse-and-rider combinations from the Americas, Africa, Asia and Europe have enjoyed some great competition during the FEI World Cup™ Jumping 2014/2015 qualifiers, with a particularly strong turnout in South America.

The Caucasian, South African and Central Asian leagues are also complete, and invitations to attend the Longines FEI World Cup™ Jumping 2014/2015 Final in Las Vegas, USA continue to be processed.

The South America South League was an impressive affair, with six legs staged between May and October 2014 in which 79 athletes participated, and it was Brazil’s Sergio Henriques Neves Marins who came out on top.

The first and fifth rounds of competition were held in Argentina, at Sol de Mayo and Buenos Aires, while the remainder took place in Brazil, visiting Sao Paulo twice and Porto Alegre once before concluding at Rio de Janeiro.

Henriques Neves Marins, a veteran of the FEI World Equestrian Games™ in Jerez (ESP) in 2002 and the Athens Olympic Games in 2004, was in flying form throughout the 2014 season. The 45-year-old rider has found a consistently good performer in his 13-year-old horse Landpeter do Feroleto, and together they claimed team silver and individual bronze at last summer’s South American Games in Quillota (CHI) before coming out to clinch maximum points at the opening FEI World Cup™ Jumping 2014/2015 qualifier. They didn’t win that day, finishing second behind Jose Roberto Reynoso Fernandez, but claimed 20 points as their Brazilian counterparts were not in the hunt for points.

Henriques Neves Marins then joined up with Reynoso Fernandez, Artemus del Almeida and Francisco Jose Mesquita Musa to win the Nations Cup at CSIO4*-W at Porto Alegre in October, and rounded up the year with another good result at the last FEI World Cup™ Jumping leg to clinch pole position in the league.

Riders from Colombia and Venezuela battled it out in the South America North League in which 12 riders competed in the four legs. The first two qualifiers took place in Caracas, Venezuela while rounds three and four were staged in Bogota, Colombia. Riders could count results from three legs, but Colombia’s Camilo Rueda won with just two scores to count, and Colombians filled all of the top five places on the final leaderboard.

Rueda was impressively consistent with his 13-year-old grey Holsteiner stallion, Cassaro, and finished with a final tally of 25 points ahead of Medina’s 23.

Norwood kicked off with a 12th-place finish at Midrand riding Capital Colnardo, but she really got into her stride with victory at Shongweni with Capital Don Cumarco, the 12-year-old grey Belgian stallion she partnered for the remainder of the series and who has a great record as a three-time winner of the coveted South African Derby.

At Polokwane they lined up third, and at Kromdaai and Port Elizabeth they finished sixth and seventh respectively, accumulating 46 points which left them a full five points clear of their nearest rivals in the final analysis.

The Caucasian series consisted of three legs, and victory went to Azerbaijan’s Kanan Novruzov. The first competition took place at Tbilisi in Georgia and the remaining two rounds were held in Baku, the capital city of Azerbaijan. There were 11 athletes in action, and 10 of them collected points.

Novruzov made the perfect start with a win at the opening leg in Tblisi riding the 11-year-old bay Holsteiner gelding Concorde 57. The 24-year-old rider followed that with a fourth-place finish in Baku a few weeks later, and those two results were good enough to leave him a single point clear of series runner-up Alexandra Olejnik.

Of the 11 participating riders throughout the series only two hailed from Georgia, and riders from Azerbaijan dominated the final leaderboard, with Elmar Abdulayet finishing third ahead of Seyid Musayev in fourth and Patrick McEntee in fifth.

The Central Asian League was another three-leg affair in which 21 athletes from three countries – Kyrgyzstan, Kazakhstan and Uzbekistan – took part, and the winner was Kyrgyzstan’s Rinat Galimov.

The league opened in Tashkent, Uzbekistan with the second round taking place at Bishkek in Kyrgyzstan and the third at Astana in Kazakhstan, and Galimov got off at a great gallop with a win in Tashkent partnering her 13-year-old Swedish-bred mare, Charlize. The 30-year-old rider then repeated her success in Bishkek and was in an unassailable position by the time she arrived in Astana for the last leg, where she was just pipped for the honours by Kazakhstan’s Oleg Popelyaev who filled runner-up spot on the league leaderboard.

Uzbekistan’s Gairat Nazarov finished third in this series ahead of Kazakhstan’s Asset Tolkumbekov in fourth and Kamil Saitov in fifth place.

It was a close-fought battle for the South East Asian title which went to 18-year-old Siengsaw Lertratanachai by a narrow one-point margin over fellow-Thai rider Chewin Manathanya. All three legs took place in Pattaya, Thailand.

Lertratanachai was silver medallist at the FEI World Jumping Challenge Final 2013 in Caracas, Venezuela and finished fifth individually at the South East Asian Games at Naypyidaw, Malaysia in that same year. She was on the Thai team at the Asian Games 2014 in Incheon, Korea and, like so many other champions this season, her success in the FEI World Cup™ Jumping 2014/2015 South East Asian League began with a win at the opening leg. Partnering the 13-year-old AES mare, Viranka B, she then went on to finish third and fourth at the two remaining competitions, but she was stalked all the way by Manthanya who finished third at the first leg but then came out to win next time with Blue Boy. It was nip-and-tuck at the final leg which was won by French rider Mathilde Montginoux ahead of Sweden’s Helena Gabrielson.

In the end, Letratanachai’s faster eight-fault result gave her fourth place ahead of 31-year-old Manthanya in fifth, and that result would count as riders used their best two scores to decide the final standings.