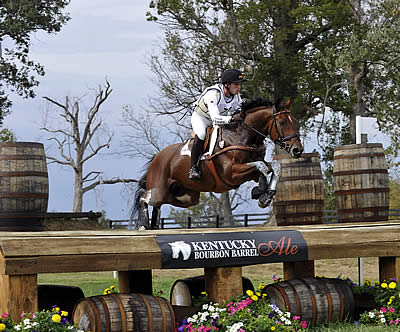 Defending world champion Michael Jung with La Biosthetique Sam FBW, seen here on route to gold at the 2010 Games in Kentucky, will be bidding to retain his title at the Alltech FEI World Equestrian Games™ 2014 in Normandy and claim a team spot for Germany at the Rio 2016 Olympic Games. (Kit Houghton/FEI)

Lausanne (SUI), 20 August 2014 – No wonder the Eventing competition is a sell-out at the Alltech FEI World Equestrian Games™ 2014 in Normandy (FRA) on 28-31 August. A record entry of 97 combinations from 28 nations is heading for the spectacular backdrop of Haras du Pin, the French National Stud founded by Louis XIV known as “the Equestrian Versailles”, where the Dressage and Cross Country phases will be held followed by a nail-biting Jumping finale at the Stade d’Ornano in Caen, with six team places at the Rio 2016 Olympic Games also up for grabs.

Four years ago at the Alltech FEI World Equestrian Games™ 2010 in Kentucky (USA) Germany’s Michael Jung embarked on his record-breaking run of gold medal success. He dazzled the world there with his superb horsemanship on La Biosthetique Sam FBW, before the pair went on to amass four more gold medals at the 2011 European Championships and London 2012 Olympic Games.

Jung, 32, is now attempting to win his fifth successive title, following double gold at the FEI European Championships on Halunke FBW last year, and he has the 14-year-old Sam, looking as well as ever, back in action after having last season off.

Jung’s main rival is likely to be his team mate Sandra Auffarth with her brilliant chestnut gelding Opgun Louvo, team gold and individual silver and bronze medallists in 2011 and 2012 and recent winners of the Aachen CICO3*, and the combination many people consider is the one to beat.

In fact, it’s hard to look past the Germans for team gold in Normandy, when you factor in Ingrid Klimke on her European team gold and individual silver medallist FRH Escada JS, Dirk Schrade on the sparky chestnut Hop And Skip, Andreas Ostholt on the exciting prospect So Is Et and the consistent Peter Thomsen on Horseware’s Barney.

However, other nations are hungry for medals. Astonishingly, Australia has never won a world team or individual title. The nearest they came in recent years is team bronze and Clayton Fredericks’ individual silver medal in Aachen (GER) in 2006.

Perhaps this will be the year that omission is rectified, as they field two CCI4*-winning combinations in Sam Griffiths (Paulank Brockagh) and Christopher Burton (TS Jamaimo), plus team newcomer Bill Levett on the 2013 Saumur CCI3* winner Shannondale Titan and Paul Tapner with the Badminton 2014 Cross-Country leader Kilronan. The British-based quartet are joined by two highly experienced home-based riders in Shane Rose (CP Qualified) and Stuart Tinney (Pluto Mio).

New Zealand has known great success at this level, winning team gold at the inaugural FEI World Equestrian Games™ at Stockholm (SWE) in 1990, and again at Rome (ITA) in 1998. Sir Mark Todd was a member of both those teams, and of the quartet that won bronze in 2010. He has a new ride this year in the German-bred Leonidas ll, 14th at Badminton.

The Kiwis again look exceptionally strong with Andrew Nicholson on Nereo, team and individual bronze medallists in 2010 and members of the bronze medal team at the London 2012 Olympic Games, Jock Paget with Olympic team bronze medallist and 2013 Badminton winner Clifton Promise and newcomer Tim Price, who makes his team debut with the Luhmühlen CCI4* winner Wesko.

Great Britain, the defending champions, are an interesting prospect. Three of their great horses from 2010 – Imperial Cavalier (Mary King), Opposition Buzz (Nicola Wilson) and Miners Frolic (Kristina Cook) – have been retired, and only two of their six horses have team experience even if their riders have plenty of medal-winning credentials.

William Fox-Pitt, the individual silver medallist in Kentucky on Cool Mountain, this time rides the imposing chestnut stallion Chilli Morning, individual bronze medallist at the 2013 FEI European Championships. Zara Phillips, world champion on Toytown in 2006, is back in action after their birth of her daughter, Mia, in January and partners her 2012 Olympic team silver medallist High Kingdom.

In the field: facts and figures

The Eventing competition begins with the first horse inspection on 27 August at Haras du Pin, followed by Dressage on Thursday and Friday 28-29 August, and Cross Country on Saturday 30 August. The final Jumping phase to decide team and individual medals will be held in Stade d’Ornano in Caen on Sunday 31 August.

The Alltech FEI World Equestrian Games™ 2014 in Normandy (FRA) on 23 August-7 September brings together close to 1,000 riders and 1,000 horses from 74 nations for 15 days of world-class competition in Jumping, Dressage and Para-Equestrian Dressage, Eventing, Driving, Endurance, Vaulting and Reining.

The FEI World Equestrian Games™ are held every four years in the middle of the Olympic and Paralympic cycle. They were first hosted in Stockholm (SWE) in 1990 and have since been staged in The Hague (NED) in 1994, Rome (ITA) in 1998, Jerez (ESP) in 2002, and Aachen (GER) in 2006. The first Games to be organised outside Europe were the Alltech FEI World Equestrian Games™ in Kentucky (USA) 2010.