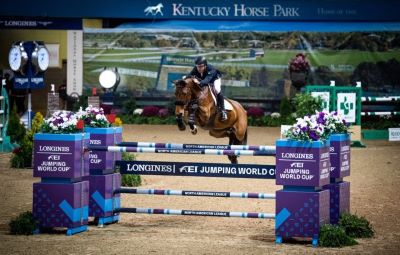 The World No. 7 had put the pressure on his competitors before he had even entered the arena. Knowing he, along with championship athletes Daniel Bluman (ISR), McLain Ward (USA), Tiffany Foster (CAN), and Margie Engle (USA), made up the final half of the lineup for Bernardo Costa Cabral’s (POR) shortened course, athletes early in the start order repeatedly took risks, hoping to gain a winning edge. Instead, they were met with rails.

The penultimate rider to compete, Farrington adjusted his strategy and instead sought a clear round that was efficient without quite laying everything on the line. The move paid off, and he and his longtime partner Gazelle swept to the top of the leaderboard and remained there. The only double-clear performers of the evening, their winning time was 35.96 seconds. Ward and Contagious finished second (4/32.60), with Bluman and Ladriano Z third (4/32.62).

“It changed my strategy a lot. I only had one rider after me, so I thought a neat clear was a smarter play,” said Farrington.

The pair’s first clear effort was more eventful. Gazelle, the 2020 United States Equestrian Federation (USEF) International Horse of the Year, was ready for the occasion and jumped the first round enthusiastically — so much so, Farrington lost his right stirrup with three jumping efforts remaining on course. He rode the final fences without that stirrup, his position remaining effortlessly unchanged.

“In the first round, she was hyper careful, so it took a bit of jockeying around,” Farrington said. “I thought the jump-off was a good opportunity to let her settle down and go for a cruise. Luckily, that paid off for me with the win.”

Farrington and Gazelle have been partnered for eight years, and their list of accolades is lengthy, including an Olympic appearance this summer in Tokyo. But at 15, the mare still has more to give.

“This is an experienced horse. She’s been an amazing horse for me and my career,” Farrington said. “[Her co-owner] Robin Parsky has been supportive of my management of this horse, and that’s part of what has made her last so long.”

Just off the podium in fourth was Tiffany Foster (CAN) and Figor, who just a week ago took the win at Washington (USA). The finish — Foster’s third top five finish of the NAL season — propelled her to the top of the North American League standings with 42 points. Conor Swail (IRL) sits second after winning the first two legs of the season at Vancouver (CAN) and Sacramento (USA) with 37 points, while Farrington moved into third with 32 points.