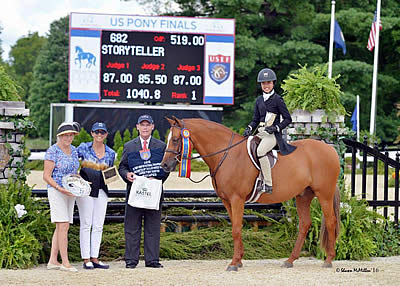 National titles are determined following three phases of competition, with Model and Under Saddle phases each counting towards 25% of the overall score, and the remaining 50% being determined by the Over Fences phase.

Gochman (Wellington, Fla.) and Fair Play Farm’s Storyteller earned the Large Regular Hunter Pony Championship after a fantastic round in the Over Fences phase to score 259.50 for first place in the phase. On Tuesday, she and the 13-year-old German Sport Pony gelding won the Model phase with a score of 259.76 and were third in the Under Saddle phase with a score of 262.04, putting them in first place overall. Their strong over fences performance allowed them to remain at the top of the leaderboard to win the Champion ribbon with a final score of 1040.80.

“I was Reserve [Champion] last year. I was really happy with the Reserve [Champion title], but I’d never been champion and it is a great honor to be champion, especially with such a great pony. He’s always there and always helps me out,” Gochman said.

Gochman is attending her fifth “Pony Finals” and the championship is one of her favorite competitions. She explained, “I like how it gives everyone a chance, and they put it in one of the best rings here. It’s definitely fun for the ponies. Pony Finals is Pony Finals. It’s a great show.”

The Reserve Champion title went to Devin Seek (Ocala, Fla.) and Ashley Vail Aycox’s Garavani with a final score of 1003.25. She and the eight-year-old Dutch Riding Pony gelding scored 246.70 in the Over Fences phase, after earning 258.76 in the Model phase and 251.09 in the Under Saddle phase.

Dakota Champey (Far Hills, N.J.) and MDHT Equestrian, LLC’s Tantallon Co-Captain finished third in the Large Regular Hunter Pony Championship with a total score of 997.90, and their over fences score putting them in second place in the phase. She and the 13-year-old Half Welsh gelding finished with scores of 257.37, 249.53, and 245.50 in the Model, Under Saddle, and Over Fences phases, respectively.

Passarelli (High Falls, N.Y.) and Jessica and Michaila Catherine Yarr Zandri’s So Enchanted won the Small Green Hunter Pony Championship with a score of 1052.46 after winning each of the three phases. She and the eight-year-old Welsh Pony Cross mare received scores of 260.13 in the Model phase and 258.33 in the Under Saddle phase on the first day of competition. They maintained their commanding lead at the top of the leaderboard by claiming top honors in the Over Fences phase with a score of 267.00.

“I just wanted to keep everything smooth and even and give her a confident ride, and not get too worked up finding every jump. I really just wanted to give her the solid ride that she deserved,” Passarelli said of her round.

Like Gochman, Passarelli is a “Pony Finals” veteran, making her sixth appearance at the championship and winning her first title. “It’s incredible. It took a few years, but this was an incredible pony to [win a title] on. I’m so thankful for the Zandris for allowing me to show this pony and to Patricia [Griffith], Dottie [Barnwell-Areson], and everyone at Heritage Farm for helping me with everything and continuing to do so.”

The Reserve Champion title went to Casey Oliver (Bellview, Fla.) and Patti Foster’s Picturesque Bow Tie with a final score of 995.98. She and the 10-year-old Welsh Pony gelding had solid scores of 245.13, 244.85, and 253.00 in the Model, Under Saddle, and Over Fences phases, respectively.

Luke Jensen (Denton, Texas) and Bill Schaub’s Mustachio were in third in the Small Green Hunter Pony Championship after scoring 995.98 overall. He and the 10-year-old Welsh gelding received scores of 248.55, 244.04, and 251.25 for the Model, Under Saddle, and Over Fences phases, respectively.

Competition continues Thursday with the Medium and Large Green Hunter Ponies contesting the Model and Under Saddle phases in the Walnut Arena. Then, the Small Regular Hunter Ponies will complete the Over Fences to determine the champion. Evelyn Walker (Rancho Santa Fe, Calif.) and Royal Moment, her own seven-year-old Welsh Pony gelding, currently lead the standings with a score of 519.99. In the evening in the Alltech Arena, the US Pony Jumper Championship will get underway with the Individual Phase I.

The live stream on the USEF Network is presented by the USHJA Foundation and will cover all of the competition from the Walnut and Alltech Arenas. Check out the USEF Network for a complete schedule.

For live scoring, results, schedule, and competitor and hospitality information, go to www.usefconnect.com/ponyfinals.

Find out more information about the US Pony Finals presented by Collecting Gaits Farm at www.ponyfinals.org.