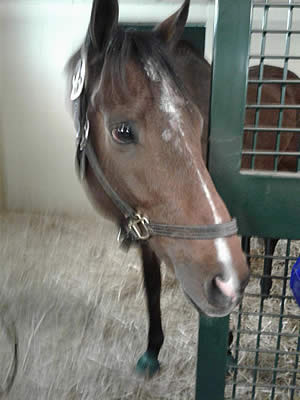 Stormy Liberal will spend a few days undergoing a brief veterinary exam at Park Equine Hospital at Woodford before joining the retirees at Old Friends’ flagship farm in Georgetown.

The son of Stormy Atlantic, out of the Royal Academy mare Vassar, Stormy Liberal was taken from the claiming ranks in 2016 for $40,000 by trainer Peter Miller and owner Rockingham Ranch. He went on to capture multiple stakes for his new connections, including back-to-back scores in the Grade 1 Breeders’ Cup Turf Sprint in 2017 and 2018.

Closing the year with four consecutive victories, among them the Grade 3 Eddie D Stakes, Stormy Liberal earned the 2018 Eclipse Award for Champion Turf Male. With the win, he became the first sprinter to earn an Eclipse in the male turf horse division.

Current owner David Bernsen invested in Stormy Liberal in 2017, and in 2019 bought out Rockingham Ranch’s interest in the horse. This past December, following a thorough veterinary evaluation, Bernsen made the decision to retire the 8-year-old gelding from racing.

Stormy Liberal, who has been enjoying some down time in Florida under the care of trainer David Scanlon, retires with 12 wins from 37 starts and just over $2.2 million in purses.

“Stormy Liberal was a once-in-a-lifetime horse,” said owner Bernsen. “He literally took us around the world from Hong Kong to Dubai, and no matter where he lined up to run, he outran his odds, which was a testament of his will to win.

“After sending Stormy to David Scanlon last December for a two-stage medical examination, it was determined that Stormy had a pre-existing injury that would require 6-8 months rest,” said Bernsen. “After consulting with David, I immediately picked up the phone to call Old Friends’ Michael Blowen and let him know I had retired Stormy.

“I am acutely aware that the industry is under fire on a lot of fronts, specifically the safety and well-being of our athletes,” Bernsen continued. “I have been fortunate enough to spend a lot of time and resources understanding some of the core factors, and, in my opinion, the predominant cause is not identifying pre-existing conditions. I would urge other owners, especially those who have been able to enjoy success at the highest level, to take a more active role in finding and supporting a solution.

“Gary Hartunian and I of Rockingham Ranch are immensely grateful to have been able to race such a magnificent horse,” said Bernsen, “and we hope his retirement to Old Friends will benefit all retired horses.”

“We’re so thrilled to have Stormy Liberal join Old Friends,” said Old Friends founder and President Blowen. “We’re grateful to everyone connected with this great athlete, especially David. They did everything to assure that he would have a dignified retirement.”

Blowen added that the farm will soon host a special ‘Welcome’ day for friends and fans of Stormy Liberal and another new Old Friends retiree, Patch, most likely in early April. Dates and times will be announced soon.