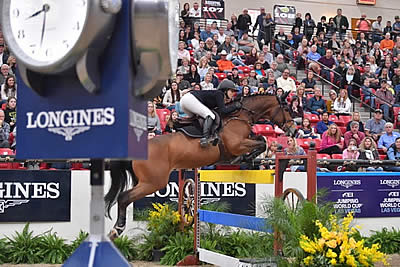 Despite recording a World Cup victory just a week prior in Thermal (USA), Adrienne Sternlicht (USA) and Bennys Legacy came to Las Vegas’ South Point Arena (USA) with some unanswered questions. The duo had never before competed indoors, but the smaller venue proved no problem for them, as they recorded a second straight World Cup victory.

They topped the $100,000 Longines FEI Jumping World Cup™ Las Vegas via a two-horse jump-off and were the only double-clear performers on the evening, crossing the timers of Leopoldo Palacios’ (VEN) shortened course in 37.68 seconds. Andrew Ramsay (USA) and Stranger were faster, but a rail put them in second; they finished on 4 faults in 35.90 seconds. In a unique result, Sarah Segal (USA) and Uma O’Neill (NZL) finished in adjoint third, as both riders recorded a single time fault in the first round with identical times of 73.39 seconds.

“Tonight, I mainly learned that he was super indoors,” Sternlicht said of her still-new mount, having only debuted with the 11-year-old gelding in September. “I really had no idea how he would be! In some ways, I found him easier to ride inside.”

“He’s a horse that goes exactly the way I like to ride: strong and aggressive. I like to help and support the horse, and he leans on me as a rider in that capacity.” — Adrienne Sternlicht (USA)

Knowing there were just two clear rounds and having to return first in the jump-off, Sternlicht approached the shortened course with a nothing-to-lose mentality while being wary of the quick challenge that followed her.

“I think Andrew has the fastest horse in the class, probably the fastest horse in FEI this week,” Sternlicht said. “I knew that if I didn’t stick to my plan, it might be costly. I think my jump-off round showed the quality of my horse. I think, personally, there are a few things I want to work on, but I couldn’t be happier with the way he jumped, and I’m happy that I stuck to my plan.”

The win moved Sternlicht into third in the east coast sub league standings of the North American League with 46 points. Brian Moggre (USA) leads those standings with 56 points, while Beezie Madden (USA) is second with 49 points. The top seven from these standings at the end of the 2019/2020 season will advance to the Longines FEI Jumping World Cup™ Final, which will also take place in Las Vegas at the Thomas & Mack Center in April.

“World Cup Finals are 100 percent on my radar,” Sternlicht said. “I am planning already. [My trainer McLain Ward] is a big planner, and we had a meeting and planned out my schedule for the next five months. I plan on being here and look forward to coming back!”

On the west coast, Karl Cook (USA) maintains his lead in the standings with 49 points, followed by Ashlee Bond (ISR) with 39 points and Will Simpson (USA) with 34 points.

The North American League continues in Guadalajara (MEX) on 25 January 2020.