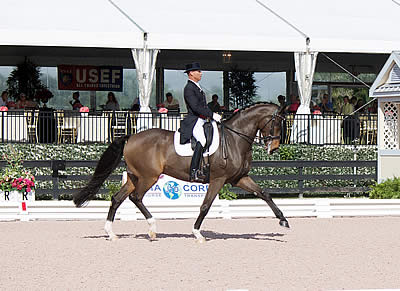 Wellington, FL (December 18, 2015) – As a top athlete in his discipline, Steffen Peters will settle for nothing less than the best for his world-class horses. That’s why for the past two years, the dressage icon has trained his Olympic partner Legolas 92 and new rising star Rosamunde on arena footing provided by Premier Equestrian, the Official Dressage Arena of the United States Equestrian Federation and the United States Dressage Federation. Once again, Peters’ meticulousness in his riding and equine partners’ care and training has paid off at the 2015 U.S. Dressage Festival of Champions, presented by the Dutta Corporation this past weekend at the Adequan Global Dressage Festival show grounds in Wellington, Florida.

After a four-year streak as the title Champion – winning in 2011 with Ravel and in 2012, 2013, and 2014 with Akiko Yamazaki’s Legolas 92 – Peters returned to the Festival of Champions this year with both Legolas and Rosamunde, Yamazaki’s eight-year-old Rhinelander mare that he began training in 2013 as a successor to Legolas. Both horses delivered outstanding performances during the three-day competition, overall capturing Peters both the Reserve Championship on Legolas and third place on Rosamunde in the Dutta Corp./USEF Grand Prix Dressage National Championship.

Of particular note was Peters’ show-stopping performance on Legolas in the Grand Prix Freestyle. The flawless routine earned the pair an impressive score of 77.675 percent, prevailing over Laura Graves and Verdades, who came in first overall in the Dutta Corp./USEF Grand Prix Dressage National Championship standings. “It was one of my best freestyles,” said Peters, adding that he felt the performance was even stronger than the freestyle that won him the Gold medal at the 2015 Pan American Games. “It wasn’t just with the music, but with the footfall of every single beat,” he explained. “It was a very clean freestyle, and I’m extremely excited.” In the same competition, a score of 74.950 captured third place for Peters and Rosamunde, positioning the up-and-coming new talent just a hair’s width behind Graves’ and Verdades’ mark of 75.125 percent.

Overall, Peters said he was thrilled with both horses’ performances, having scored 74.22 percent with Legolas and 72.62 percent with Rosamunde in the FEI Grand Prix Open on Wednesday. In Thursday’s FEI Grand Prix Special Open, Rosamunde stole second place from Legolas with a score of 74.549 percent, promising to be a worthy successor for the top international mount, who placed third at 72.412 percent.

Since 2013, Peters has trained Legolas and Rosamunde on arena footing provided by Premier Equestrian, the global footing company that also provided the dressage arenas used at the Adequan Global Dressage Festival facility where the Festival of Champions was hosted. Peters researched footing extensively before making the decision to equip his own California facility with Premier Equestrian arena surfaces and the OTTO Sport Perforated Mat system, which is also the choice arena system of Akiko Yamazaki, owner of Legolas and Rosamunde. “Premier’s footing is the best we have ever ridden on,” said Peters. “It’s the perfect combination of materials and is very easy to maintain. The footing and mat system provides superior traction as well as cushioning, exceptional drainage and retains moisture while reducing dust. We couldn’t be happier. Premier Equestrian is simply the best!”

Premier Equestrian is proud to sponsor top professionals like Peters, who the company considers a true “Premier Equestrian.” For more information about this industry leader in providing outstanding arena footing and equipment, visit www.PremierEquestrian.com or call 1-800-611-6109.