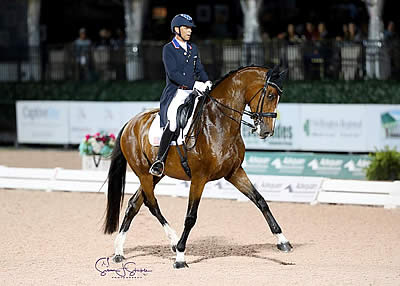 Wellington, FL – February 20, 2020 – It was a bonanza day of grand prix level action on the second day of week seven of the 2020 Adequan® Global Dressage Festival (AGDF) at the Palm Beach International Equestrian Center (PBIEC) in Wellington, Florida. There were four classes contested at the level, two three-star classes, and two five-star.

In the five-star ranks, it was Steffen Peters (USA) who topped the FEI Grand Prix CDI5*, presented by Palm Beach Equine Clinic, which was a qualifier for the FEI Grand Prix Special CDI5* on Saturday. The 55-year-old California-based rider rode Suppenkasper to their third highest career grand prix score, leading the field of 12 with 76.239%, just 0.63% shy of their best ever in this test, which they laid down in AGDF week five. The pair is unbeaten in their seven starts so far this year.

Both second-placed Sabine Schut-Kery (USA) and Canada’s Brittany Fraser-Beaulieu posted identical scores on the board of 73.674%, so the standings were decided by the only collective mark. Schut-Kery’s rider mark on Sanceo was higher than Fraser-Beaulieu’s on All In, shoring up the final placings.

Peters, whose bond with Suppenkasper, Four Winds Farm’s 18.2hh gelding by Spielberg, is going from strength to strength, said: “He was great, even more relaxed than last time. I rode the first pirouette just a tiny bit too late and then I didn’t have enough time to prepare the change at X so it got a little crooked and it wasn’t a good score. The rest was very clean.

“The passage and piaffe felt better. I’m able to ride the piaffe a little bit more in place. Debbie [McDonald] and I have been working on it. That’s been so much fun. It’s amazing the work and the collaboration with Debbie here in Wellington. She deserves a huge part of that 76%.”

He elaborated on the training the pair have been doing on Suppenkasper’s piaffe, adding: “He’s so eager to go forward. The horse has so much tremendous power; there was not a single moment where I was pushing him. His desire, even in the piaffe, is to go forward. So I ride it – I do five or six steps, and then I halt. Instead of leaping forward into trotting or running into the passage, we halt or even rein-back and say, ‘Listen buddy, we stay here a little longer.’ That wasn’t possible even six months ago, so it’s a huge step ahead.”