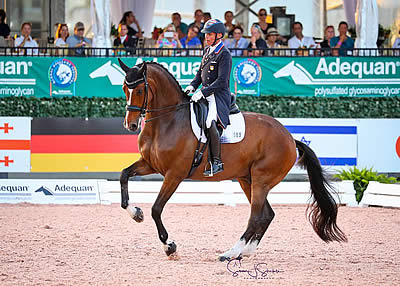 Wellington, FL – February 6, 2020 – It was a head-to-head between two titans in the FEI Grand Prix CDI-W, presented by Helgstrand Dressage. The two as-yet unbeaten USA pairings of Steffen Peters (Suppenkasper) and Olivia LaGoy-Weltz (Lonoir) tussled for the top spot on the opening day’s action of week five of the 2020 Adequan® Global Dressage Festival (AGDF) at the Palm Beach International Equestrian Center (PBIEC) in Wellington, Florida.

It was Peters, the last to go of the 23 combinations, who stamped his authority on the class, claiming victory with a new personal best of 76.869% on Four Winds Farm’s 18.2hh gelding by Spielberg — including a high score of 79.13% from Swiss judge Hans Voser. The test was peppered with eights and nines for a wide variety of the high-quality work.

“Every show has been getting a little bit better,” said the 55-year-old California rider, who has built the giant horse’s confidence brick by brick in the early part of the AGDF 2020 season. “I was super excited because in the walk I heard the tents flapping, but ‘Mopsie’ didn’t hear it and that’s a huge step forward because that really threw him off the first week when we competed here. The Wellington arena is the plan to give him the exposure for the future.

Despite career-high scores, Peters feels that there is still even more to come from the 12-year-old as he continues to gain in confidence in the ring: “It’s super exciting to get a 79% from one judge. Both Debbie [McDonald] and I feel that there might be an 80% in there and it doesn’t hurt to dream about and visualise that. The goal is there.”

The top 15 combinations from this class return on Friday night to contest the FEI World Cup™ Grand Prix Freestyle, presented by Helgstrand Dressage, to music under lights and in front of packed stands.

Friday night’s freestyle will present unique challenges for the incredibly sensitive and reactive Suppenkasper, but Peters asserts that everyone will know right away how the horse is coping with the atmosphere: “The first halt will tell everything,” he explained. “If I get him to stand still right at the beginning of the arena, we’re starting with a huge extended trot, then coming to the piaffe. If those early movements work, I think most likely we’re in good shape. But it’s a huge hurdle.

“If it goes great, then that’s the ticket to the World Cup™ Final in Vegas [in April]. Some people say you can’t talk that way or you’ll jinx it, but I’ve learnt to dream more, visualize more — and why shouldn’t it happen tomorrow night? I have amazing memories from 2009 [when Peters won the Final on Ravel] and I look at the picture on my phone of me holding up that World Cup trophy every single morning. I have a certain routine from lots of coaches and I listen to people like Denzel Washington, Oprah Winfrey, and Morgan Freeman who motivate me. I go through that routine every single morning,” concluded Peters, who was on the bronze medal-winning USA team at the Rio Olympic Games in 2016.