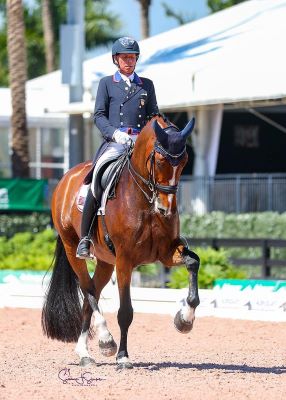 Peters and the 2008 KWPN gelding by Spielberg, owned by Akiko Yamazaki and Four Winds Farm, kicked off their week on a high note, besting the FEI Grand Prix for Freestyle CDI5*, presented by CaptiveOne Advisors, with a score of 77.109%.

“After the test he felt like he had another two tests in there,” began Peters. “This is actually the right weather for him, where I can ride him a little bit and he settles down a bit more. That warm weather is what we are going to face in Tokyo, maybe even quite a bit hotter than this, and Mopsie seems to be ready for it. He’s been very consistently in the 76, 77 percentile, and that’s super exciting that I can ask for a bit more. Today he had a very clean test with a good, relaxed walk, so I’m extremely happy.”

Peters and the gelding have won every class they have competed in this season, and Peters is moving into the freestyle with hopefulness. “I think it’s always fun to support the organizers in the five-star freestyle,” he explained. “If we do well then, it’s nice to give back to our people, and help to pay the bills a little! We’re really looking forward to it. The freestyle is one of my favorite tests to ride, though sometimes it’s not Mopsie’s, but the night atmosphere is still something he needs to get used to.”

In the FEI Grand Prix for Special CDI5*, presented by Palm Beach Equine Clinic, the USA’s Sabine Schut-Kery and Sanceo took the highest honors of the class with a 74.522%.

Schut-Kery and Alice Womble’s 2006 Hanoverian stallion by San Remo re-entered competition after a summer break in November, earning scores of over 74% in the CDIs in California before arriving in Florida in January. Those classes, along with a national class last week at AGDF, helped prepare the pair for their biggest competition in a year.

“Sanceo was really great,” noted Schut-Kery. “Any errors made today were rider errors, and I think I lost him in the zigzag. However, he felt great in the first part of the test and then recovered quite well [from those rider errors]. I have no complaints, and I feel like we are getting to the point where we can see where we want to push more, and where we need to finesse things.”

She exclaimed, “Having this five star is amazing. When I look around, a lot of the places are closed down all over the world. We are so fortunate. I think everybody agrees that we would follow any protocol, just to be able to keep going. Speaking for myself, I have a horse that’s 15 years old. It’s not like he’s eight or 10, and one year doesn’t matter. For me, it’s very special to be here and be invited to this competition, to the five star, and that there is that caliber of show. Thank you to everyone that puts this on and supports it.”