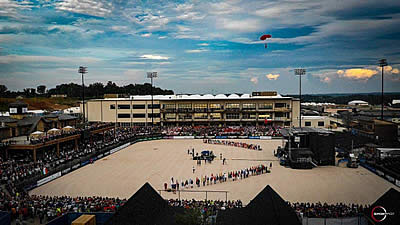 Some of equestrian sport’s most famous names took a central role for their countries during the traditional parade of flags that highlighted proceedings at a packed Tryon Stadium before a crowd of athletes, grooms, National Federation staff, and spectators. Rising country musician Joe Lasher opened for Grammy-nominated artist Hunter Hayes, while athlete representatives were welcomed into Tryon Stadium to officially commence the start of competition.

Carrying the American flag was dressage sensation Laura Graves, who said, “Tonight is really special for me. It is September 11, so getting the chance to raise this flag was very emotional.

“I am looking forward to a really great next few days of competition. It is going to be exciting for us in Dressage and it looks like all the horses have a terrific venue and great facilities. We are ready to get going,” she continued.

Triple Olympic Team Eventing Gold medalist Andrew Hoy had the honor for Australia and he said, “Last time I rode in a World Eventing Championship in America it was in 1978, so it is absolutely wonderful to be back.

“It is a great honor to be a flag-bearer for my country. I’m looking forward to getting out there and the competition starting.”

Dressage rider Julio Mendoza, who represents Ecuador, but lives relatively locally to the venue, added, “I’m really excited to be here in Tryon. This is my first FEI World Equestrian Games and I am beyond happy to be here representing my country and to have such a great opportunity. To be in the same ring with such amazing athletes and great horses is so exciting and I can’t wait for the competition to get started,” he concluded.

Eventing icon Ingrid Klimke (GER), a winner of numerous major championship medals, did the honors for Germany and she commented, “I am really happy to be here with my horse. We are ready for the next adventure. We have a wonderful venue and I am very proud to be here and be a part of it all.”

China’s Alex Hua Tian is also set to be among the field when Eventing gets under way on Thursday.

Meydan Endurance will have the honor of launching the eighth FEI World Equestrian Games™ Tryon 2018 (WEG) on Wednesday, September 12. Eight different equestrian disciplines governed by the Fédération Equestre Internationale (FEI) will be showcased throughout the duration of the two-week event, which will conclude on Sunday, September 23.

The discipline of Endurance takes center stage from before sunrise, beginning at 6:30 a.m. EST, when competitors tackle a course of 100 miles (160 kilometers) that will traverse through the states of both North and South Carolina.

More than 100 athletes from 40 countries will head into the countryside with the winner expected to return home and across the finish line later in the evening.

The long-distance competition, viewed as the ultimate test of the partnership between horse and rider, is against the clock and tests speed and stamina of both horse and rider, challenging each combination to ensure an effective use of pace and navigational skills of undulating terrains. Mandatory veterinary inspections are required following each course loop, where horses are cooled, their heart rates monitored, and jogged for soundness in order to further continue. Rest periods are also a key aspect of the competition, ensuring horse and rider welfare throughout the 100-mile test.

The Tryon 2018 track will feature the region’s natural and spectacular terrain, starting and finishing on the main TIEC property.

The horse inspection took place on Tuesday afternoon, with a bumper nominated entry list being highlighted by defending champion HH Sheikh Hamdan bin Mohammed Al Maktoum from the UAE, who won the world title in Normandy four years ago.

A strong finish is also expected of Spain’s Jaume Punti Dachs, who starred when his country won 2010 Team Endurance Gold and is aiming for a top finish in this year’s competition.

Host Nation Aiming to Rein In Their Rivals

It should come as no surprise whatsoever that the United States remains Johnson Controls Reining’s dominant force.  Other countries have barely had a look-in since the WEG first welcomed the discipline of Reining during the early 1990s. The United States has won a remarkable seven titles, with only Canada breaking that sequence 12 years ago.

Reining originates from the working movements of horses and riders when herding cattle and is a judged event designed to show the athletic ability of ranch-type horses in an arena setting.

With large fast circles, flying lead changes, 360-degree spins and sliding stops all required within individual performances, Reining is a truly thrilling spectacle. It is also the only western discipline showcased at WEG.

There is also considerable crowd involvement, with the audience clapping and cheering loudly at every turn as competitors go through their paces. Team USA newcomer Cade McCutcheon, a first time WEG competitor, comes from a long lineage of top Reining competitors, and will take center stage at the international event.

Dressage is predictable, people say, but it won’t be at the FEI World Equestrian Games™ Tryon 2018.

Horses from 31 countries were declared fit to compete on Tuesday following their jog inspection. Discipline competition opens with the Grand Prix over two days and deciding the medals for teams, to be handed out on Thursday. The top 30 move on to the Grand Prix Special on Friday with the top 15 showing their Grand Prix Freestyle to music on “Super Sunday” on September 16, concluding the first week of WEG.

Isabell Werth from Germany might add more gold to the already incredible seven WEG medals she already holds. Werth stunned insiders by her decision not to bring her top horse Weihegold OLD, instead opting to bring her favorite mount, Bella Rose, who has recently returned from a long-term illness.

One of Werth’s strongest contenders will be one of her own teammates. The scores for Sönke Rothenberger and Cosmo have been rising since they were members of the winning 2017 European Championship team for Germany.

The United States’ has hopes set on Laura Graves and her ride Verdades, breathing down the current necks of both Werth and Rothenberger since the 2016 Olympic Games in Rio de Janeiro, where they finished fourth, followed by a second-place finish at the FEI World Cup™ Finals in early 2018.

Adding to this roster of elite riders, the defending champion from the WEG in Normandy, France, as Charlotte Dujardin and her new partner, Mount St John Freestyle will represent Great Britain. The mare is only nine and the “dark horse” of the competition. “I’m not sure what to expect, but she’s felt brilliant this far and taken everything on board, so we’ll see what the next few days bring,” Dujardin said confidently.

Team Germany won their 11th World Championship Gold medal in Normandy 2014 and brings a strong squad to Tryon, to complete the dozen. Fourteen other teams will attempt to prevent that, with the USA, Great Britain, the Netherlands and Sweden set to be the most optimistic for a medal.