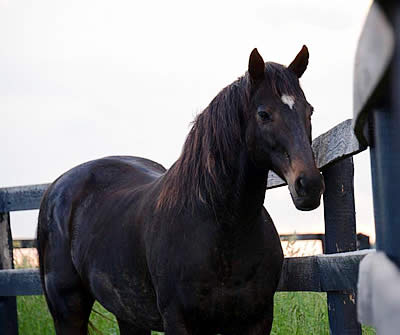 GEORGETOWN, KY – JUNE 7, 2016 – Graded-stakes winner Delay of Game has died. The 23-year-old gelded son of Summer Squall was euthanized on Monday evening due to the infirmities of old age. The horse also suffered from the neurological disease EPM.

Delay had been pensioned at Old Friends, the Thoroughbred Retirement Farm in Georgetown, KY, since 2010. Michael Blowen, founder and president of Old Friends, made the announcement of his passing this morning.

He went on to score 16 victories over seven seasons in premium allowance races at virtually every track and on virtually every surface, from Keeneland and Churchill Downs to Saratoga, Belmont, and Gulfstream Park.

Among his final triumphs were back-to-back wins in the 2000 and 2001 Tampa Bay Breeders’ Cup Stakes at Tampa Bay Downs.

Delay of Game retired from the track shortly after with career earnings of $809,023.

Following his retirement from the track, Delay returned to the stable of Rusty Arnold and his wife Sarah. “We had him almost his entire career,” said Sarah Arnold. Off the track, he had a stint as a stable pony and also as a riding horse. But once he contracted the EPM, we knew we had to find permanent retirement for him, and Michael was kind enough to take him and take great care of him.

“I never met a horse who loved his job like he did,” Arnold continued. “He loved racing, and not just winning, but racing. When I think of how to describe him, I think of what groom Will Harbut always said about Man o’ War: ‘He was the mostest horse.'”

“Delay of Game was not only terrific racehorse; he was just a total ‘people’ horse,” noted Old Friends’ Blowen. “He was a favorite with many of our tour guides and visitors, and he loved the attention. We were proud to care for him these last years, and we can’t thank the Arnolds enough for all they did for him.”