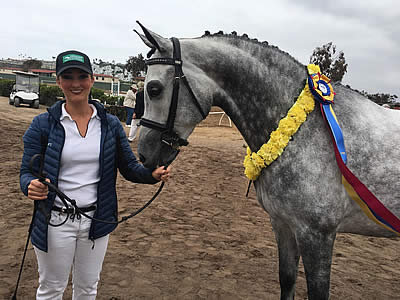 Nampa, ID (October 4, 2018) – The 2018 Sport Horse National Arabian and Half-Arabian Championship Show held in Nampa, Idaho is known for its glitz, glamour, and high spirited horses. This year one young lady outshined all of the sparkle with her outstanding smile and sportsmanship. Hillary Boothe, of Lompoc, California, competed two horses over the weekend and greeted everyone she encountered with warmth and sincerity.

Boothe owns and runs Promises Ranch LLC alongside her mother, Sarah. Together, they have built a strong presence on the Arabian horse scene and have won countless Champion and Reserve Champion titles along the way. Boothe competed in a wide variety of classes over the weekend with her mounts. My Khinda Party, a six-year-old stallion, was bred and raised by Boothe herself. This made his stellar performance that much sweeter. She was thrilled with his performance the entire weekend. Boothe’s second mount was Susan Claycamp’s six-year-old Khiamo Ko, who stole the show.