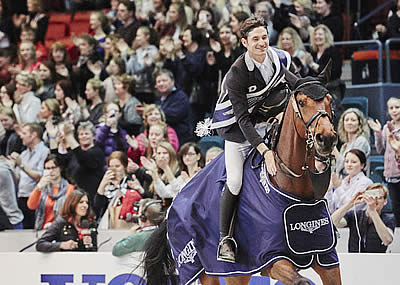 Guerdat with Corbinian at Gothenburg (SWE) in 2016. (FEI/Liz Gregg)

He could be forgiven for being down in the dumps right now. His chance of becoming the first-ever four-time FEI Jumping World Cup™ champion blown out of the water and no opportunity to chase down a second individual Olympic gold medal this year either. All sport has ground to a halt and his personal life has also been affected because his wedding to fiancée, Fanny Skalli, which was planned for next month, has also been postponed for the foreseeable future due to the pandemic.

It doesn’t sound like a recipe for a good mood, but the man who has been holding court at the top of the Longines Rankings for 14 of the last 15 months is staying positive.

Halfway through our interview April 17, Swiss star Steve Guerdat put the current situation into perspective with his trademark passion.

“Nobody talks about the millions of kids around the world who don’t have clean water to drink, and are dying of hunger every single day. We only think about how am I going to get to the shows, how am I going to pay for my Mercedes, how am I going to buy my new car and buy my new truck and buy my new horse. The poor face a crisis every day of their lives. Now we in the rich countries have to face this problem, but there is no reason to be afraid. It’s an experience, and for once it’s the same for everyone. So we have to look forward and maybe think about doing things differently – but there will be a way out of it,” he says.

Our Q&A interview began simply: Who were your heroes when you were a child? Steve doesn’t hesitate in answering…

“Michael Jordan (the world-famous basketball star who made several memorable come-backs during his extraordinary career). I’ve always been a sports fanatic, and his story is an inspiration. Normally a superstar is really good over a short period of time, but with him you were never disappointed (each time he made a come-back). It was like a lesson of life and sport, about not giving up, and as a kid he was someone I was crazy about.

“As a rider my hero has always been John Whitaker. I like him for much the same reasons. With John everything is easy. I think he doesn’t even know what he’s achieving because he does everything so naturally. Horses respond to him and it’s just natural for him to ride and win in a very natural way with a completely natural attitude. That inspires me as a rider,” Steve explains.

It takes him a bit longer to reply to the next question though. So what’s it like to be the hero now yourself? There’s a bit of a silence. I can imagine him shifting from foot to foot; he’s clearly not comfortable with this one….

“I really don’t feel like that; I don’t see myself as really good. I trust what I do but I still have so often the feeling that I am so bad at it, so many mistakes, so many things I’d like to do so much better. I’m not even thinking about being a hero, being someone who inspires other riders….”

So I say, “But so many people look at you and say, ‘Gosh, if only I could ever be as good as Steve,’” but he quickly comes back with “Well for sure they can, because I could get so much better!”

We move on to the person who has influenced him most, and his response is instant….

“My dad (Philippe Guerdat). He was never pushing himself forward, always letting me be free to do what I want and that’s why I respect him so much. In the sport he was the most influential person since day one. And of course in recent years Thomas Fuchs has also been an influence on my career.”

Who is in your support crew?

“My longtime grooms Heidi and Emma, my rider Anthony, we have 10 people at home and they are also very important to me. My family, from my parents to my cousins, and I have a close relationship with my owners too. The blacksmith and the vet – there are so many people and they don’t just work with me and support me; they are also my friends. And of course now for a few years I have my girlfriend, who will be my wife soon, so I’m very lucky in the situation I am in, to have so many great people around me.”

Why do you enjoy being around horses?

“Because they give so much and they don’t ask for anything back. We try to give them as much back as we can, but they are not asking for it! They are so loyal, and they never cheat on you.”

What do you like least about horses – all the hard work? This question provokes a tone of outrage….

“It’s not work! If you think it’s work, then you are doing the wrong job! Maybe a groom can say that, but definitely not a professional rider – what we have is an amazing life. It takes a lot of time, but it’s very far away from being hard work!”

Which of all the horses you’ve ridden was/is the one you’ve loved the most? Not the slightest hesitation here as his tone becomes much softer….

“Jalisca, because she’s basically the horse that made the biggest step in my career. I don’t want to say she saved me – I was riding, I was healthy, but I was in a complete hole in my sporting career when that mare brought me into the spotlight, winning the Cup in Geneva (in December 2010) and giving all the time 200% for me. She was the kindest horse you would ever find. She was always there fighting for me; she was the best horse that has ever been around for me!” he says.

Is there a horse that you didn’t like at all?

“I’d be lying if I said I’ve never been frustrated with a horse. But the truth is as soon as I’d be annoyed I’d be thinking no, it’s you that’s to blame, you made the mistake of having too high hopes for this horse, or you didn’t educate it the right way, or you put too much pressure on it or, or, or… in the end if a horse doesn’t work out it’s only yourself to blame. It could be riding wrong, or buying wrong and having the wrong expectations of the horse who couldn’t do what you would like him to do. It’s not his fault; we are all born with some qualities – there are some things you can do and some things you cannot do so well – but there is only so much any of us can do.”

Is there a horse that you would love to ride?

“No, because I already rode the best horse in the history of showjumping, Tepic La Silla! I only rode him for three or four months and I won my first medal in the European Championships in Donaueschingen (GER) in 2003 and a couple of Grand Prix. He was a horse from Alfonso Romo and I would have liked to have him longer, but I feel privileged I could ride him in just a few shows because he was unbelievable. He had absolutely everything. For me he was the very best!”

The horse who gave you his personal best? Steve laughs as he replies, “Nino, and he’s standing right in front of me!” Now 19 years old, the gelding that helped him to individual Olympic glory in London in 2012 is in happy retirement at Steve’s lovely farm at Elgg in Switzerland. “What was so good about him is that when I wanted to be clear I was clear 95% of the time. We also had some bad rounds, but from the time I really figured him out we had very few fences down. I didn’t jump him a lot, but most of the time he was double-clear in Grand Prix,” he says fondly.

Your strongest friendships in the sport?

“I don’t have many, but the ones I have are very, very close. Alain Jufer, he was on the team in Calgary when we won (first-ever Swiss Nations Cup victory at Spruce Meadows in 2016). We grew up together, and started riding together as kids. Gregory Wathelet, for 15 or 20 years now, same with Daniel Etter and I could mention Eric Lamaze as well. They are my closest friends. I can’t say why; they are all very different people and came into my life at different times; they are good friends and get along together very well but it’s not that they are each best friends with the other – they are just people I know I can rely on, and they know it’s the same the other way around.”

“My biggest worry right now is I employ 10 people who’ve been with me a long time. They’re not just employees but friends and part of the family, and I want to have them around me. But I know that if I can’t keep some of them, they will find another job and they will survive as well. Two or three times in my life I’ve had to start from nothing and I’ve no problem with doing it again. I’m not worried that tomorrow I have to muck out myself and drive the truck and work more, because I love what I do. When you like what you do the only motivation is not just adding more and more money; it’s about enjoying life with your friends and family.”

One silly thing you’ve done during your working life?

“Maybe the first show I did when working for Tops… there was a show in a place called Heikant and I drove the truck for about three hours with the groom and eight horses, but when we arrived we couldn’t find the showgrounds. There was no navigation system in those days, and we drove around for a long time before I realised that I’d taken us to Heikant in Belgium, and the show was in Heikant in Holland! Luckily, it wasn’t too far, maybe another two hours’ drive, and we only missed a couple of classes!”

How are you feeling about the postponement of the Tokyo 2020 Olympic Games?

“It changes things for sure; it will be one year later and we don’t know what will happen between now and then. Horses will be one year older, but some that would have been too young this year will be ready for it. It’s different to anything we’ve faced before, but this is what sport is about. You have to be able to adapt to many different situations and make the best of it. There’s nothing we can do about it, and it was the right decision to move it. We’ll deal with this, and somehow we will move on.”