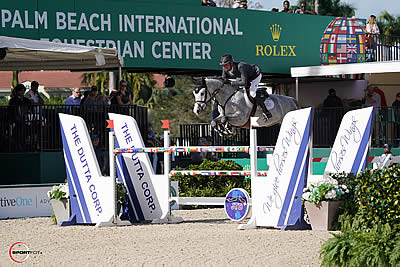 Course designer Santiago Varela (ESP) welcomed 44 horses to the final event of the week with 15 advancing to the tie-breaking jump-off. Smith and Princeton Z, a nine-year-old Zangersheide stallion (President x Indoctro) owned by Torrey Pines Stable, rose to the top while promising a bright future for the young horse and a blooming partnership.

Their time of 39.52 seconds bested Madison Goetzmann (USA) and her own Prestigious, who pocketed a time of 40.14 seconds to finish as the runner-up. Ireland’s David Blake and Don’t Touch du Bois, owned by Pine Hollow Farm, rounded out the top three in 41.04 seconds.

“Princeton came to us in the beginning of January, and I got along well with him right away,” said Smith, who has worked with Canadian Olympic champion Eric Lamaze at his Torrey Pines Stable for several years. “He jumped really well in the [Hermès] Under 25 team event earlier in the season, so we thought we’d step him up to this. He’s a nice horse. And I think he’ll do everything; he’ll jump all the big tracks.”

Saving the best for last in the seven-horse jump-off, including number-two ranked rider in the world, Martin Fuchs, Catherine Tyree and her 10-year-old Irish Sport Horse gelding BEC Lorenzo (Livello x Guidam) blazed to the win in Sunday’s $73,000 CaptiveOne Advisors 1.50m Classic CSI5*. They finished double-clear over Varela’s track in 37.39 seconds over the short course for owner Mary Tyree.

“I was able to watch everyone go before me in the jump-off, and I had a plan,” said Tyree. “To be honest, the first three jumps didn’t go according to plan, so I knew I had to really gallop and stay on it to the last three jumps. My horse met the challenge and was great. The CaptiveOne 1.50m series is a very competitive class, and it’s fun to have the championship at the end.

“Santiago Varela has built great courses all week. They have been technical, challenging, and big enough,” continued Tyree, who trains with John Brennan and Missy Clark of North Run. “I was lucky; I had two horses, and I was able to go around one time and fix my mistakes and be there for Lorenzo to give him the best chance to jump a clear round.”

Tyree has had Lorenzo for two years, and the gelding only jumped his first 1.50m last year. “Every time you ask him big questions, he exceeds all expectations I have,” she said. “There was a point where I didn’t know where he would end up, but I always knew he would be very competitive.”