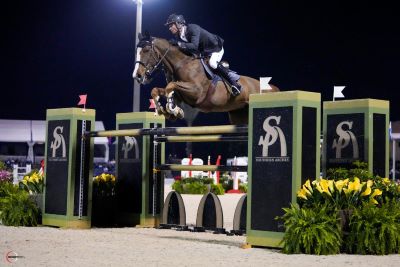 There were 45 entries in the biggest class of the week, and they competed over a course set by Anthony D’Ambrosio (USA) and Andy Christiansen Jr. (ECU). Eight were able to find the path to a clear round and continued to the jump-off.

Starting out the jump-off with a bang was Olympic team silver medalist Kent Farrington (USA) and his 10-year-old KWPN mare Orafina (For Fashion x Canturo). They set the time to beat at 36 seconds flat, which would hold up for second place.

Smith and Ayade Hero Z were able to bring the winning time down to a blisteringly fast 34.31 seconds to take the win. Leaving out a stride in the first line was not originally in Smith’s plan.

Daytime competition in the International Arena was highlighted by the $30,000 CP National Grand Prix. McLain Ward and Robin Parsky’s First Lady outran the rest of the field to emerge victorious.

First to jump off was Jennifer Waxman (USA), who set the time to beat at 43.786 seconds aboard The Scato Group LLC’s Scato van de Molenbrug Z. With each round, the jump-off got faster and faster until McLain Ward (USA) and First Lady could not be caught, crossing the timers in 39.125 seconds.

First Lady is a star in the making that has been with Ward for two years.