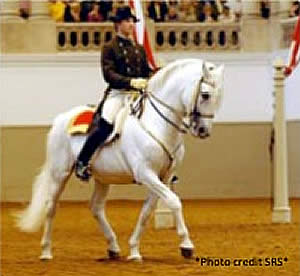 The Spanish Riding School of Vienna has stood for equestrian tradition and perfection for over 430 years. It is the only institution in the world which preserves to this day the classical art of the Haute École which began in the Renaissance.

The “Spanish” part of its name stems from the Spanish horses ‘the ancestors of the Lipizzaners’ which were much sought after in the royal court at that time.

The equestrian Haute École dates back to the classical art of riding practiced in Greece, which was rediscovered at the end of the 15th and in the early 16th centuries. With the Renaissance came a whole new lifestyle in the dynasties of Europe, which naturally included a new equestrian style different to that which had been practiced in the Middle Ages.

Although it is still not known when exactly the first “Spanish Riding School” was built, various documents indicate that this may have been in the year 1572. However, it was more than 100 years later, between 1729 and 1735, that Emperor Karl VI commissioned Josef Emanuel Fischer von Erlach to build the baroque Winter Riding School which is world famous today and which has remained the home of the Spanish Riding School. This magnificent hall has a varied and interesting past, and was not only used for riding and training the white stallions. After the death of Karl VI in 1740, it was a perfect setting for jousting contests, carousels, and masked balls. During the Vienna Congresses particularly (1814-1815), the Spanish Riding School inspired an international audience of the most influential politicians. In the year of the revolution, 1848, meetings were held in the Riding School between the citizens of Vienna and the Reichstag.

Today, the Lipizzaner stallions of the Spanish Riding School can be seen almost every day during Morning Exercises as well as once a week at a gala performance in the Winter Riding School. (taken from Chronicle of the Horse website)

The Spanish Riding School in Vienna is the only institution in the world which has practiced for over 440 years and continues to cultivate classical equitation in the Renaissance tradition of the haute école.

The objective of classical equitation is to study the way the horse naturally moves and to cultivate the highest levels of haute école elegance the horse is capable of through systematic training. The result creates an unparalleled harmony between rider and horse, as only Vienna’s Spanish Riding School achieves. (taken from www.srs.at)

Bereiter Marius Schreiner, of the famed Spanish Riding School, will be returning for a 3rd time to the Brevard Equestrian Center to help Head Trainer, Lisa Smit, with her Grand Prix prospect, Ubilee II, along with 9 other lucky horse/rider combinations who will apply to ride.

We look forward to making this a community event and introducing the general population to what we do here every day at Brevard Equestrian Center!