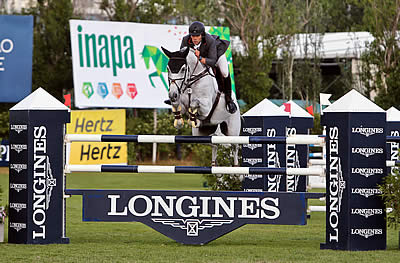 Lisbon (POR), 27 May 2016 – Marco Fuste’s Spanish team won the tenth leg of the Furusiyya FEI Nations Cup™ Jumping 2016 series in Lisbon (POR). This was the fourth round of the Europe Division 2 League, and only the winners and the host nation were chasing points towards the 2016 Furusiyya Final which will take place once again in Barcelona (ESP) in September. Friday night’s result sees Spain climb to the top of the leaderboard, pinning Ukraine back into second place ahead of the next leg in Sopot (POL) in two weeks’ time.

Portugal shared runner-up spot with Great Britain at the end of the night while Belgium finished fourth ahead of France in fifth, Italy in sixth and Ireland in seventh place. The eighth team, from Brazil, did not compete in the second round.

Spain and Great Britain shared the lead on a zero score after the first round, with the British close behind carrying just four faults and Portugal next in line with five on the board. Italy went into round two with 12 while Belgium carried 13 and the Irish were already trailing the field with 25 faults on what turned out to be a tough day at the office for some of the horse-and-rider combinations.

Spanish pathfinder, Manuel Fernandez Saro, produced a second four-fault result when round two got underway, but that was followed by the second part of a double-clear from Paola Amilibia and Notre Star de la Nutria. So even though Sergio Alvarez Moya couldn’t match his opening clear with Arrayan, leaving two on the floor at his second attempt, Spanish supremacy was secured by a another great double-clear from Eduardo Alvarez Aznar and Fidux which left the winners with a final tally of four faults.

Meanwhile, the British and Portuguese battled it out for second place to finish on level pegging with 13 faults each. The French, however, went into rapid decline when Bernard Briand Chevalier’s Qadillac de Heup was withdrawn and the decision not to run their fourth-line partnership of Nicolas Deseuzes and Quilane de Lezeaux when they had three fault-free scores in the first round proved costly. Because when this pair picked up 12 faults in round two, then that had to be added to the eight posted by Harold Boisset (Quolita Z) and the four from Clement Boulanger (Sweet Phir) for a total of 24, which sent them plummeting down the order.

Britain’s Anna Edwards kicked off round two with just a single time penalty with Blazer B, but Laura Robinson collected eight faults on her second tour of the track with Jonti. Tim Wilks produced one of the four double-clear performances of the day Quelbora Merze to steady the situation, but when Louise Saywell and Dassler followed their opening clear with a big score of 17 faults then Robinson’s eight had to be included.

The host nation had no shortage of drama either, first-line rider Antonio Matos Almeida contrasting his clear first round with Nikel de Presle with elimination when the action resumed. His team-mates held their nerve, however, Duarte Seabra (Fernhill Curra Quinn) and Luis Sabino Goncalves (Filou Imperio Egipcio) both faulting just once this time out while Mario Wilson Fernandes’ double-clear effort with Saltho de la Roque underpinned their final standing.

Belgium finished just ahead of the French with a total of 23 faults, while the Italians racked up 38 and the Irish finished with a final tally of 56.

Winning team member, Spain’s Sergio Alvarez Moya, said the course set by Portugal’s Bernardo Costa Cabral was “fair. It is very hard to build in Europe Division 2 as there are a couple of strong teams but others that are not as powerful, some amateur riders as well competing. It is a difficult balance for the course designer to strike. He kept it competitive until the last rider which is always great. I’m very happy we won!” he added.

And he admitted that he didn’t enjoy the easiest of days himself. “The first round was much smoother than the second round for me. My horse jumped pretty good overall. The second round I felt more like a bad pony rider! I expected my horse to jump a bit more; I don’t know if it is the floodlights that got to him. Thanks to my colleagues who pulled a good result and we will keep on working from here on in!” he said.

There was a two-hour break between the two rounds, with the second half of the competition taking place under lights.

Moya’s team-mate, Paola Amilibia, said, “I thought jumping under the floodlights was going to be different, but it was actually positive. The change of ambience was great. Usually for my horse, if he knows the course really well then he doesn’t jump as well – on the contrary, it kept him on his toes, and he jumped great!”

“We decided that we were going to bring a team that was good enough to seal the victory here. We achieved our target, and now we have to continue jumping well in both Sopot and Gijon. Although the Olympic Games are our priority, we are looking to get back to Division 1 which is very very high up our list.

“We might go to Budapest; it depends on the timing of the riders and availability of horses if we feel we would be able to go there and win. Winning here was extremely important for us in the race for top spot in Division 2. I think we need to win at least one more qualifier to get promoted into the Europe Division 1 as it is the best four results that count. Ukraine has won twice and have finished second once, so we need to beat their record and get at least another victory,” he explained.

And when asked about his orders to his team after the first round, Marco Fuste replied, “I didn’t have to say anything special between the two rounds. I just said let’s eat, have a nice dinner and let’s get back to work. These three guys and the lady I have here with me are top professionals. They perform every time; I don’t need to come up with any special speeches!”

The next leg of the Europe Division 2 series will take place at Sopot (POL) on Friday 10 June. For information on the Polish fixture, visit csio.sopot.pl or contact Press Officer Czerwona Furtka, media@csio.sopot.pl, + 501 491 253.

Manuel Ataide, Event Director: “Congratulations to Spain for sealing their second Nations Cup win here in two years! It is very important for us to be part of this prestigious series. We are one of the oldest jumping competitions in Europe and are working tirelessly to improve the show.”

Bernardo Costa Cabral, Course Designer: “We know from experience that the jumping is totally different at night than in the day time. It is a bit different for them all. I was happy with the result. It wasn’t a very strong course but still technical enough to test the riders. It was demanding but not in giving a bad experience for the less experienced riders and amateurs.”

Eduardo Alvarez Aznar ESP: “It was tricky staying inside the time allowed, especially in the second round. Some riders were going a bit slower; the turn back in the first line in was a difficult one, although not for me as I have a quick horse. The show here in Lisbon is fantastic; it has improved a lot. The training area is brand new and wonderful. It is the first time I jumped under flood lights here and I really enjoyed it.”

Paola Amilibia ESP: “There was a completely different ambience in the first round to the second which is very different to a traditional Nations Cup. It is good to have an extended break and give the horses a rest. It is good they are able to eat a bit and recover in time for jumping the second round. The course was demanding and fair enough at the same time.”

Manuel Fernandez Saro ESP: “I like to go first; I am the eldest of the team! The course was great; congratulations to the course designer. The class was great. I thought the lights would be more difficult for my horse to deal with than it actually was; he took it very well.”