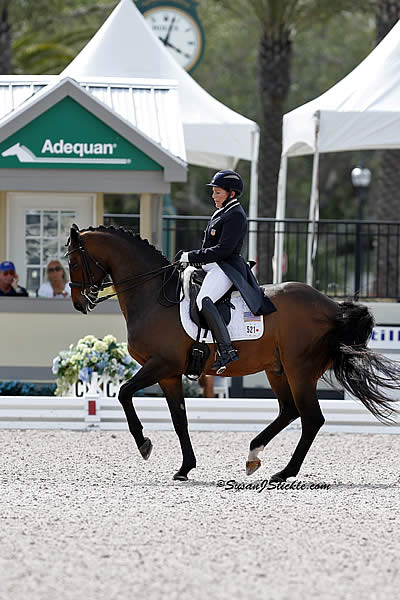 Shelly Francis and Doktor during the 2013 Global Dressage Festival. (Photo courtesy of SusanJStickle.com)

Wellington, FL (April 29, 2013) – Shelly Francis isn’t shy about saying she likes to train her own horses, and while dressage isn’t a sport typically known for pimping its rides, the fact of the matter is:  developing nationally-ranked dressage horses means ever-evolving equine physiques and you’d better have saddles and a saddlefitter up to the job.

The Loxahatchee, FL rider and trainer wrapped up her winter season at the Adequan Global Dressage Festival with an FEI Prix St. Georges win (72.105%) on Patty Stempel’s nine-year-old black Hanoverian gelding, Danilo, during the Wellington (FL) CDI5* presented by Diamante Farms.  Out of nearly 20 entries, Francis and Danilo were the only duo to break the 70% mark.

That’s just for starters.  Described by Wellington observers as having the best of string of horses since her last bid – 1998 – for a World Equestrian Games, the 54-year-old rider’s winter circuit closed with her sitting pretty on the Tim Dutta National Rankings with two more Stempel horses:  Doktor, a 10-year-old Oldenburg gelding (Diamond Hit x Gurena x Renoir 1) placed eighth (68.805%) in the Grand Prix, and nine-year-old Hanoverian gelding, Danilo (De Niro x Annabelle x Andiamo) at third  (71.513%) on the Intermediaire I, top ten lists.

Francis qualified Doktor for the World Cup Final in Gotenborg, Sweden but has declined the invitation, patiently ceding that the horse still needs “more nights under the lights” before being asked to perform before such an electric environment. “If he gets afraid,” the pragmatic veteran observed, “we will have to deal with it for years to come. Another one or two years may be fine.”

In the meantime, her horses’ talents – and musculature – continue to train and develop, which is why she has entrusted their comfort and her own for the last five years to Sommer saddles.

“I love these saddles.  They’re really comfy for me and the horses and feel so soft and wide.  There’s no pressure on either side of the spine.  The horses feel freer moving and I don’t have sore backs.”

As with any athlete, training builds muscle, and she relies on twice-yearly saddle refits as each talented gelding develops.  “That’s where Marty comes in,” she said, referring to Marty Haist, a master saddler who also joins his wife, Beth, in operating The Horse of Course.

The Horse of Course carries an extensive selection of Sommer saddles, including the FlextraEQ Savoy, Diplomat Exclusiv, Lars Flextra and Spezial Dressage, and is a proud supporter of the equestrian community, traveling cross-country with a convenient mobile store to bring stylish clothing, accessories, saddles and products to shows, and sponsoring classes.

“I get most of my clothes there,” said Francis.  And what girl doesn’t love a shopping trip?  In concert with the increasing athleticism of her horses, she has embarked on her own fitness program and has lost more than 30 pounds.

With Normandy on the horizon in 2014, worrying about what to wear while riding in front of the world is a problem this Grand Prix rider would happily welcome.  “Of course I want that 75% but I may have to wait until next year.  I don’t want to push too hard.  When a horse wants to do it, that’s a nice feeling.”

As nice a feeling as the freedom and comfort of her Sommer saddles. To learn more about The Horse of Course, visit their website at www.thehorseofcourse.com.