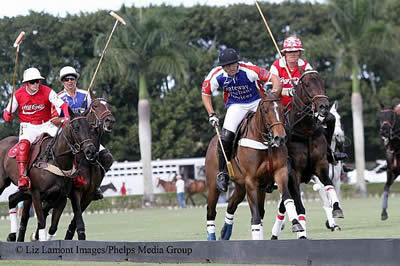 Gateway Merchants (which started the game with an automatic point due to the team’s handicap of 19) had a fighting chance in the first half. It kept Coca-Cola at bay, briefly leading by a point or two and tying the game at the end of the second (3-3) and third (5-5) chukkers.

That’s when Coca-Cola asserted itself, changing the entire face of the game the moment the second half started. Every member of its team scored in the fourth chukker. Gillian Johnston, who played an exceptionally strong game throughout, scored once in the third and twice in the fourth.

But at the start of the second half, an unexpected change in Gateway Merchants’ lineup gave Coca-Cola something to think about. Nico Escobar subbed in for Scott Swerdlin, who has been battling an army injury.

“When Nico came out we got a little bit nervous that he was going to maybe mark Gillian and try and make a run for it,” said Sugar Erskine. “Actually Gillian scored two goals in that chukker, and we ran away with it.”

Erskine maintained a consistent scoring streak for Coca-Cola from start to finish, making a goal in every chukker except one. He broke the 5-5 tie within the first 30 seconds of the second half. With the same tight teamwork Coca-Cola showed throughout the game, nearly every player on the red team was in on the next goal. The play started and ended with Julio Arellano. He made a long pass through the air to Erskine, who sent it with one strong hit to Johnston. She outmaneuvered Escobar, who was in hot pursuit and rapidly gaining ground, to hand the ball off to Arellano. He grabbed it, pulled out of a thick pack and scored, giving Coca-Cola a 7-5 lead.

The fourth chukker, which had opened 5-all, ended 10-5 for Coca-Cola. By then Coca-Cola’s dominance was unstoppable, although it did dial down the assault a bit for the rest of the match. Both teams scored two goals apiece in the final chukker, ending the game 13-7 for Coca-Cola.

“Anything could have happened today,” said Mason Wroe, who made one precisely calculated shot after another throughout the game, scoring in the fourth and sixth chukkers. “We just wanted to keep it simple and disciplined, and we’re happy with the outcome.”

The Ylvisaker Cup continues Thursday with four matches. The first three will be played at IPC, starting with FlexJet vs. Orchard Hill at 10 a.m. Casablanca plays Lucchese at 2 p.m., and Enigma plays Valiente at 3 p.m. The final match of the day, CT Energia vs. Palm Beach Illustrated, will take place at the Everglades Polo Club at 4 p.m.