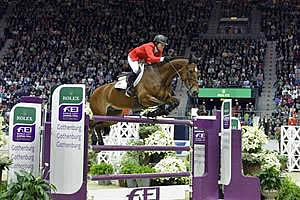 Lexington, Ky. – At the USEF Year End Awards Gala Saturday night, Abigail Wexner’s Simon and Janet Peterson and Liza Boyd’s Brunello were named International Horse of the Year and National Horse of the Year, respectively. Voting was open to the public in December and both horses, already fan favorites, were rewarded for their tremendous results throughout 2013 with support from voters.

With rider Beezie Madden, who was named 2013 USEF Equestrian of the Year on Friday, Simon’s year was one of top finishes in the U.S., and on the biggest international stages. Simon started the year in Wellington, Fla., where he secured a fourth-place finish in the Adequan Grand Prix at the FTI Consulting Winter Equestrian Festival, and jumped fault free as a member of the victorious U.S. team at the Furusiyya FEI Nations Cup presented by G&C Farm.

Simon’s year didn’t end in April though, as he continued to jump well through the summer and fall. At Spruce Meadows Simon collected third place finishes in both the PwC Cup and the ATCO Power Queen Elizabeth II Cup. At the Furusiyya FEI Nations Cup Final in Barcelona, Simon and Madden anchored the team and helped it earn the Consolation Round win.

“This is my favorite awards night of the year because it honors the horse,” said Madden while accepting the award for Simon,. “I think what makes Simon so special is his athletic ability and his desire. I have to thank his owner Abigail Wexner for all of her support.”

For years Brunello has been a star of the hunter ring. His signature style, consistent top finishes, and partnership with rider/co-owner Liza Boyd has made him a distinguished winner and fan favorite. They’ve been a fixture on the International Hunter Derby scene since the program’s inception, and they earned their biggest win to date in August.

Brunello kept up the success in the fall with second-place finishes at the Jacksonville Finale International Hunter Derby and the WCHR Palm Beach Hunter Spectacular.

“He such a special horse,” said Boyd when hearing about Brunello’s win. “I’ve had him since 2007 and every, every day he comes out and tries his heart out for me… he’s the horse of a lifetime and he really, really deserves this award.”

The following four horses were honored in 2013 as USEF Horses of Honor.

Pete Kyle’s A Ruf Gal entered 2013 as one of the top reining mares in the country and continued to earn top results in her best season to date. Her phenomenal 2013 campaign began in April with a fifth-place finish in the CRI3* and a Reserve World Championship Freestyle title at the Kentucky Reining Cup. Next she won the CRI3* and the USA Reining Open class at the NRHA Derby in June, before earning co-champion honors in the CRI3* and a top-10 finish in the Senior Reining division at the AQHA World Show.

WGC CHCallaway’s Annabel Allison entered the record books in 2013 as the first mare to win the Five-Gaited World’s Grand Championship title at the Kentucky State Fair in 14 years. In the lead-up to her historic win in Louisville, Silver Brook Stables’ impressive mare and rider Debbie Foley earned the Five-Gaited Championship at the Midwest Charity Horse Show. The talented duo completed its 2013 campaign with another Five-Gaited victory at the UPHA American Royal National Championship Show.

Sam stepped up his game when he was needed most in 2013. Always dependable in the coaching discipline, Sam was called upon to perform on the world stage in championship level combined driving over the summer. He met the challenge gamely was undeterred as he drove alongside an inexperienced youngster to help the U.S. earn its best finish ever, fourth, at CAI Riesenbeck then delivered the performance of a lifetime at the World Championships in Slovakia, helping the United States to finish again in fourth place, just five points away from the podium.

More from the 2014 USEF Annual Meeting, including video from the entire USEF Year End Awards Gala, is available at http://www.usefnetwork.com/featured/2014USEFAnnualMeeting/.