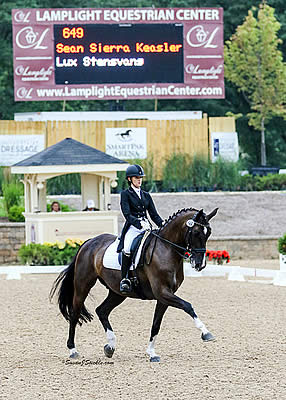 Wellington, Florida (February 7, 2016) – The USEF’s Dressage Youth Program targets some of the country’s best up-and-coming dressage talent, helping aspiring Juniors and Young Riders break their glass ceilings and build their skills in the upper echelons of dressage sport. As part of their resolve to connect with and teach America’s future dressage stars on a more regular basis, the USEF implemented the Select Athlete’s One-on-One Coaching Program, which identifies top Juniors and Young Riders to connect with top FEI coaches with the intention of providing support and resources for them to advance in competition. Following a decorated Junior and Young Rider career, Wellington, Florida based dressage rider Sierra Keasler was selected to participate in the prestigious 2017 coaching program with FEI Judge Charlotte Bredahl.

Horse and athlete combinations must meet rigorous criteria to be considered, including average scores of 68% or higher on the USEF Ranking Lists for the 2017 and 2016 Festival of Champions/NAJYRC/U25 Grand Prix or have earned a top 3 placing of 68% or higher in the last 12 months in the Young Rider or Junior Divisions at the Festival of champions and/or CDIs. Keasler, who has been a top placed competitor since 2011, has numerous advanced dressage placings including Reserve Champion in the Brentina Cup, a top 5 finish in the NAJYRC, and scores over 70 in the FEI Grand Prix and U25 Grand Prix. She currently trains with Silke Rembacz in Wellington, Florida, who will be included in the coaching program’s workshops as she and Bredahl work to take Keasler’s career to the next level. As she gears up for another season of intense competition on Florida’s winter dressage circuit, Keasler is thrilled to be able to receive concentrated, in depth instruction from Charlotte Bredahl and Dressage Youth Program.

“Any opportunity to work with the USEF has been an invaluable learning experience and particularly rewarding in terms of my development as a rider,” said Keasler. “I’m so happy that I’ve been selected to receive the One-on-One training, and look forward to the opportunity to ride with Charlotte and utilize the input from a highly regarded coach and judge. I cannot state enough how beneficial these programs are for competitors and am thankful that the USEF has chosen to invest their time and efforts into developing young riders.”

Keasler began her advanced dressage career in 2011 as a successful Junior competitor in the NAJYRC. She placed in the top 5 at Nationals that year, and quickly progressed to the FEI level, earning her USDF Silver Medal after competing Hyperion Farm’s Corcovado at Prix St. Georges. She and Corcovado were also the Fourth Level Young Rider Region 3 Champions in 2014. In 2015 she earned the ride on Lux Stensvang, and in their first outing at Grand Prix scored 72.9%. That same year they successfully competed in the U25 Grand Prix at the Adequan Global Dressage Festival and were the Reserve Champions in the 2015 Brentina Cup. In 2016 she again campaigned Lux in the U25 Grand Prix, culminating in a 4th place overall finish at the 2016 US Dressage Finals. After purchasing Lux as her primary competition mount, Keasler began training in 2016 with FEI dressage trainer Silke Rembacz as she prepares for the 2017 Adequan Global Dressage Festival.