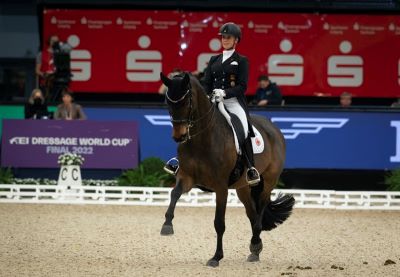 It was no surprise when the reigning Olympic and European gold medallists, 36-year-old Jessica von Bredow-Werndl and her 15-year-old mare TSF Dalera BB, strutted their way into pole position in the Short Grand Prix when the FEI Dressage World Cup™ Final 2022 got underway in Leipzig, Germany.

Drawn in prime last-to-go position, the German duo soared ahead of the opposition to post a score of 84.793, pinning Denmark’s Cathrine Dufour and Vamos Amigos into second place and their German counterparts and defending three-time champions Isabell Werth and Weihegold OLD into third.

A strong test from Denmark’s Nanna Skodberg Merrald and the 17-year-old Atterupgaards Orthilia put them top of the leaderboard on a score of 75.752 when fourth to go, and that proved unbeatable until Werth posted 79.756 to go out in front when twelfth into the arena.

But then Dufour broke the 80 percent barrier with a great performance from the 10-year-old Vamos Amigos to put 80.019 on the board, only for von Bredow-Werndl to deny her the top step of the podium with her winning ride.

It’s now down to Saturday night’s Freestyle to decide the fate of the 2022 FEI Dressage World Cup™ title, and for Werth, this entire week is filled with emotion because her great mare will be officially retired that evening in a special ceremony. She couldn’t hold back the tears in her post-competition TV interview.

There was emotion for von Bredow-Werndl too. “As you know, I’m six months pregnant and I feel super fit and so does Dalera, but from a sporting point of view it’s a little bit sad because this is my last big competition before a break,” said the rider who has swept all before her over the last ten months.

Dufour was elated with the result she achieved from her relatively young horse. “I was surprised and super happy with his performance. He was really on fire in the ring and the audience started clapping in the first extension, and I thought, ‘No!’ because he had legs everywhere! But he’s only done a few indoor shows so the fact that he kept his mind in the right place and performed like he did today – that is really fantastic!” she said.

When asked if her Olympic ride, Bohemian, might find himself in the shadow of this new young star, Dufour laughed and said, “No, you don’t know how big Bohemian’s ego is!  Of course, Vamos has plenty of quality and there is way more in him, but Bohemian has more experience so far and I feel very lucky I have two horses that are currently ready for a team position – obviously with the World Championships coming up in Denmark. And I also enjoy every competition because you never know what happens,” she pointed out wisely.

Werth said she was pleased and proud of her great mare. “She did a super job, just a little mistake. I think a one-tempi was a bit short in the beginning; she was so focused and especially the highlights were piaffe/passage and the pirouettes were really good. So I’m just happy and looking forward to Saturday and it’s a pleasure for me to present her in that way. She’s done so many great competitions; from the beginning to the end she always tries to give her best and that makes her a very special horse,” she said.

Looking ahead to Saturday’s Freestyle, von Bredow-Werndl said she loves her current one “and I think Dalera does too; she feels the rhythm, she knows it’s her music, and maybe that gives her even more confidence.”

It still feels like she’s improving and always giving 100% and when there are mistakes it’s because of me. She’s always on fire and always willing to do her very best.”

Dufour said she is “borrowing bits and pieces from Bohemian’s Olympic Freestyle and since I’ve only done two World Cups, I haven’t had time to make one of his very own (for Vamos Amigos). So I’ve stolen the music and played with the choreography. It’s a super high degree of difficulty, and I think the music suits really well and it tells a story about my life at the moment. I feel like I’m living the dream back home and I just enjoy every day with the horses, and I think the music sums it up really well. It’s a really powerful Freestyle and I’m just excited to ride it. He’s still young and it’s my first World Cup Final, so I’m just here to enjoy it and have fun!” she explained.

Werth is determined that Weihegold will go out in style on Saturday night.

“I hope we can show a very good test like she deserves, and it will be pleasure to be here with a loud crowd in a competition. I think it’s just great to retire her not in an empty arena; she really deserves this atmosphere, so I’m really looking forward to it and I will try to enjoy it. And of course, I have the pressure of showing her as best as possible, more than ever before because it is the last one!”