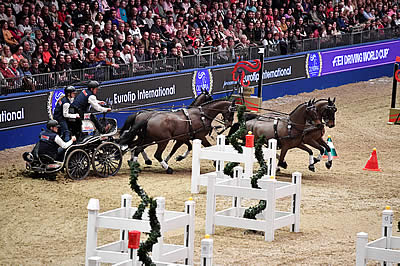 The FEI Driving World Cup™ presented by Eurofip International was once again dominated by Australia’s Boyd Exell in a gripping two round competition, with Koos de Ronde, his closest challenger, over 4 seconds behind.

Earlier in the day, the Longines FEI World Cup™ was won by reigning European Champion and current World No. 2 Martin Fuchs riding The Sinner, whose spectacular jump-off round was over a second faster than Max Kühner in second.

Three days of flawless and thrilling rounds culminated in victory in the FEI Driving World Cup™ Leg, presented by Eurofip International, for maestro Boyd Exell. “One of the most incredible things was the crowd,” said Boyd. “They are really loud and they are really with us.”

Dutch course designer Jeroen Houterman’s course included twisting but flowing obstacles and cones requiring accurate curving to remain faultless. However, there were plenty of places for gallops as well. “The plan was to keep everything as simple as possible. For most of the course they could go at 90-100% [speed],” said Jeroen. “But when you go too fast, that’s when there is the risk of having a ball.”

That was certainly the case in round one, where over half the field picked up additional time penalties, which decided the three to go forward to the final.

The Netherlands’ Ijsbrand Chardon was first to go. Having driven one of the steadier, but clean, first rounds, he was determined to better his time after an inauspicious start to the show in the first two driving classes. His speed certainly improved, knocking almost six seconds off his initial run’s time. However, this came at the expense of two early balls, leaving the door ajar.

“My first two days at the show were pretty bad,” said Ijsbrand, a multiple championship winner. “My mare Candy was in season at the Budapest show two weeks ago, and still wasn’t great here. I was training at 6am this morning, but it just didn’t work out the way I wanted.”

Following was fellow countryman Koos de Ronde, whose speed in round one gained him access to the drive-off despite having hit cone number two. “Some of the cones were a little tricky and I was mad with myself [in the first round],” he said. “But I was more focused in the second round.”

If the pressure was on multiple medallist Boyd to maintain his rank, he certainly didn’t show it here. However, Koos’ round wasn’t so steady that Boyd could relax. “There was less than a cone between Koos’ time and my time in the first round,” said Boyd, who is based in Valkenswaard in The Netherlands. “So I aimed to go for the same again.” It worked beautifully and secured the win.

Although this class carried points towards qualification for the FEI Driving World Cup™ final, Boyd was competing at Olympia on a Wild Card, so maximum points were passed down to Koos.

Britain’s Daniel Naprous, who has a busy schedule as a stunt rider, finished sixth having had a promising second place at Olympia earlier in the week.

Belgium’s Wilm Vermeir achieved his first Olympia win with a bold display of speed riding in the Martin Collins Enterprises Christmas Tree Stakes. Riding King Kong d’Avifauna, Vermeir, who was last to go in the six-horse jump-off, had to throw his heart into the round to take the win.

“I thought they were going faster and faster so I knew I really had to go for it,” Vermeir explained. “This show is unbelievable and it’s not easy to win here.”

Holly Smith, who now heads the Leading Rider of the Show standings from William Whitaker by a 15-point margin, rode a brilliant round on Denver, but Vermeir managed to shave 0.9 of a second off her time of 33.82.

Earlier in the day, Cheshire’s Red Morgan, 15, claimed his biggest win to date with the sole double clear in The Voltaire Design Mince Pie Stakes. Riding Bodyssee des Avelines in the class for 148cm ponies, he remained cool under pressure in both rounds of the exhilarating competition.

“It was a tricky course,” said Red, who is based between Britain and Belgium, where he competes internationally. “The track was tight in places with a tight time, and there was a double you needed to be really straight for.”

Hannah Barker (Ammanvalley Santino) was first of three to go through to the jump-off to challenge for this year’s title. A pole down gave Red the advantage: “I just aimed to be quick without being stupid,” he said. It worked perfectly as he and his 12-year-old mare came home cleanly to put the pressure on the final rider, Lila Bremner (Lapislazuli), who with four faults handed the victory to Red.