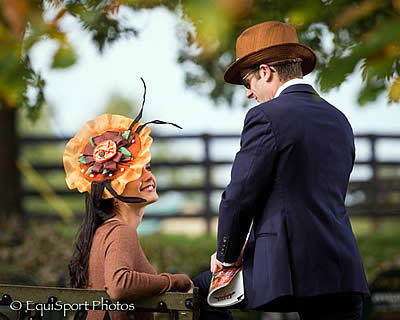 “Hats Off to the Horses: The Road to the Derby” is an online fashion auction fundraiser that benefits Old Friends, the Thoroughbred Retirement Facility in Central Kentucky. This is the sixth consecutive year that Old Friends has joined with acclaimed milliner Sally Faith Steinmann of the Massachusetts-based Maggie Mae Designs® to auction six handcrafted Derby hats between November and April, each inspired by one of the non-profit organization’s 150 retired racehorses. To date, this unique fundraiser has earned over $21,000 for Old Friends. This “Clever Allemont” chapeau is up for bid as a special holiday addition to the fundraiser and is auctioning November 17th through the 27th (not the 23rd as previous information stated).

Eclipse-Awarding winning Julien Leparoux is one of horseracing’s leading jockeys, having just captured his 2,000th win at Churchill Downs in October. The France-born rider has earned titles at Churchill, Keeneland and Turfway Park and in 2009, his banner year, Leparoux became only the second jockey in history to win three Breeders’ Cup races in a single year.

Shea Leparoux is the daughter of West Coast conditioner Mike Mitchell and has spent her life around horses and the race track. She also loves musical theater and has worked as an entertainer at Disneyland and in various stage shows. These days you can hear her as the voice of the Thoroughbred Aftercare Alliance’s new promotional video “All about the Horse.”

About the horse: 1984 Rebel Stakes winner Clever Allemont was rescued from a kill pen in 2008. Clever Allemont was retired to Old Friends in 2009 through the efforts of an amazing team of people who wanted to ensure his safe retirement. He enjoyed over five years as a beloved member of the Old Friends family before passing this year. In tribute, MAGGIE MAE DESIGNS® has created a very special millinery design to celebrate his life. Michael Blowen, president and founder of Old Friends, states, “Clever Allemont was such a great asset to Old Friends. He was the kindest, friendliest stallion on the farm. He inspired deaf people because he was deaf, visually impaired people because he enjoyed life though he’d lost an eye, indeed anybody who knew what it’s like to overcome hardship. People call Clever Allemont a ‘rescue,’ but it’s really the horses who rescue us.”

About the hat: The “Clever Allemont” is a fascinator with an oval base fashioned out of “raw sienna” brown dupioni silk. The underbrim is lined with coppery brown metallic taffeta and edged with a delicate mocha braiding. Despite having vision in only one eye, Clever seemed to view the world straight on. To reflect his attitude, the entire base of the fascinator is secured to the headband at a jaunty angle. The rose is framed by a layer of chocolate organza bow loops with green organza and chocolate silk leaves beneath it. The orange netting is dotted with white buttons to reflect Clever’s racing silk colors of orange with white polka dots. Five black silk organza “feathers” provide a playful finishing accent to the centerpiece while beautifully framing the face.

The “Clever Allemont” chapeau is up for bid as a special holiday addition to the fundraiser from November 17th through the 27th. Interested bidders can go to the Old Friends website at www.oldfriendsequine.org and follow the link.

Maggie Mae Designs Custom Millinery offers magnificent hats for all occasions, from glamorous racing events such as the Kentucky Derby and the Royal Ascot to stunning bridal wear and handsome cocktail fashions. Every hat is carefully handcrafted by milliner Sally Faith Steinmann from her home base in South Harwich, MA. Salons of her fashions can be seen on her website at www.maggiemaedesigns.com.

About Old Friends
Old Friends is a 501 (c) (3) non-profit organization that cares for more than 115 retired racehorses. Its Dream Chase Farm, located in Georgetown, KY, is open to tourists daily by appointment. Old Friends also has a satellite facility in Greenfield Center, New York, Old Friends at Cabin Creek: The Bobby Frankel Division, which is also open to visitors. For more information on tours or to make a donation, contact the main farm at (502) 863-1775 or see their website at www.oldfriendsequine.org.