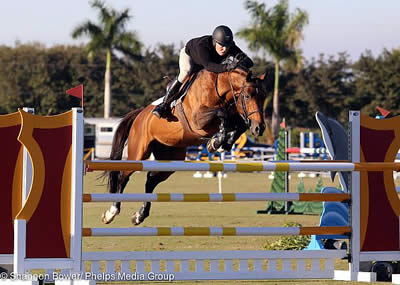 Wellington, FL – January 28, 2015 – Sharn Wordley continued his winning streak this week at The Ridge at Wellington’s Turf Tour, claiming victory in both of the $2,400 1.30-1.35m jumper classes aboard Popstar Lozonais, owned by Ashland Stables. It was no small feat to come to the International Polo Club (IPC) at the end of the day and top fields of 44 and 30, respectively, but Wordley made both courses look effortless.

Equestrians of Wellington are flocking to the Turf Tour to see what all of the buzz is about. When riders and horses get to compete on the turf once, they’re hooked — many of the teams are traveling to each of the tour stops to enjoy a much different atmosphere from the bustle of season. It’s clear to see that the show is bringing back a much beloved tradition of competing on turf. The two rings saw close to 150 trips today, with each week of the competition growing exponentially. The vast polo fields created an excellent backdrop for some of Wellington’s most competitive jumpers.

Brisk weather brought out the spunk in some of the horses in the morning, but it didn’t stop the eager riders who were keen to be the first on the lovely grass at IPC. A bright, sunny day with a bit of a breeze made for the perfect show day.

Competition in both rings remained strong throughout the day. The Grand Prix field saw riders from 8 in the morning until the sun began to fade around 5 p.m. The second grass ring stayed busy with a horse constantly in the ring, all the way until the medium jumpers finished up in the mid afternoon.

In the first class, Wordley flew around the course, clocking a time of 32.414 seconds. Alex Granato was a strong contender in the class, claiming the second, third and sixth places. His rides, Cesario 15 owned by Page Tredennick, came within a second of the winners’ time with a 33.140 seconds, Allana Featherstone’s Basho finished on 35.846, and Josh Dolan’s SLF Annie Lennox was close behind with 36.762. Fourth went to Paul Yanke on his own Chill Haze in the horse’s debut to the Turf Tour this season. Darrin Dliin picked up the fifth place ribbon on Susan Grange’s Tennyson.

Wordley was enthusiastic in his support for the Turf Tour. “I like the fact that we can get the horses out. You know, we’re in Florida and at the Winter Equestrian Festival for months on end; it’s good to get the horses away and to a different location. It’s good money, too! I mean $15,000 for a 1.40m class! You have to jump with 100 in it for $6,000 at other shows; you get to jump here for $15,000 with 35 in it so the odds are a lot better. And also, if someone’s putting on an event, I like to support it if I can. The courses were nice and pretty straightforward today.”

The second 1.30m class saw some stiff competition as well. Wordley finished at the top of the leaderboard. Coming in a close second was Ki-Juan Minors aboard Mavis Spencer’s Matana. Andrew Welles claimed the third place ribbon on his own Quickley 3. Juan Ortiz riding Synchronocity Group’s Charley finished fourth. Chapel Z, owned by Flintwoode Farms LLC, was piloted by Lisa Jacquin to the fifth place finish and Ansgar Holtgers rode his own Best Wishes to round out the top six ribbons.

The Ridge at Wellington was proud to feature their newest jump sponsor, Hollow Brook Wealth Management, with the fence set up as an oxer in the first line of the course for the 1.30m class. The jump was a beautiful addition to the already impressive set of fences that course designer Nick Granat had available. Jump sponsorships are still available.

The second ring saw plenty of action throughout the morning and early afternoon. The first class of the day was the Low Jumpers, won by Alan Griffin on Margaret Bopp LLC’s Cequila. Kristen Lando picked up the win in the second class aboard her own Wirco Polo.

The second division was the Medium Jumpers at the 1.20-1.25m height. Jean Van Gysel won the first class on her own Lucille 72. Estar, ridden by Chloe Field for Hidden Brook Farm, won the second class of the division.

Friday’s events promise to be exciting, with the $15,000 1.40m Grand Prix running from 8 a.m. through 4:30 p.m. Beginning at 8 a.m., there will be both the Children/Adult and Masters Jumper classes, along with a classic round for both divisions, running concurrently with open cards until noon. In addition, there will be a Low Schooling Jumper division with two classes running concurrently offered at this height. The $2,000 Child/Adult Classic is pointed from Marshall & Sterling, NAL & WIHS. The $2,000 Master’s Jumper Classic, open to riders 50 and over, is also pointed from Marshall & Sterling, NAL & WIHS. The Junior/Amateur-Owner competitors will start at 12:30 and run until 4:30 p.m., with both the regular class and classic card open concurrently. The $3,000 Junior/Amateur-Owner Jumper Classic is NAL pointed. High schooling jumpers will also be offered with cards running concurrently.

Week four of the Ridge at Wellington’s Turf Tour is taking place at The International Polo Club, located at 3667 120th Avenue South in Wellington, FL 33414. The show entrance is off 120th Street between Lake Worth Road and Pierson Road.