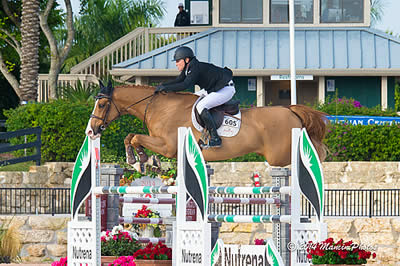 Wellington, FL – December 8, 2014 – Equestrian Sport Productions hosted its annual Year End Awards Show this weekend on December 6 and 7 at the Palm Beach International Equestrian Center in Wellington, FL. A $10,000 Open Stake was held on Saturday and the $25,000 ESP Year End Grand Prix was the highlight event on Sunday.

Anthony D’Ambrosio of Red Hook, NY set the courses in the International Arena for the weekend. In the grand prix, he saw 27 entries with four clear rounds to advance to the jump-off, where the winner completed the only double clear effort. Sharn Wordley (NZL) and Ashland Stables’ Hickstead Axel took top prize with their clear round in 40.03 seconds. Sophie Simpson (USA) and Simpson Show Jumping, Inc.’s Why Not were faster in 39.64 seconds, but had four faults to finish second. Angela Covert (CAN) and Utan had four faults in 42.50 seconds to take third place honors. Gemma Paternoster and Osiris, owned by Paternoster and Julia Harrison Lee, also incurred four faults and placed fourth with their time of 44.79 seconds.

“My wife’s family bought him as a young horse because they also owned Hickstead,” Wordley explained after his win. “He is one of Hickstead’s oldest (babies) that I know of, so he is one of the first doing the grand prixs. He is really coming along good. I have taken him slowly. I started doing the grand prixs with him about a year ago but I never went really fast with him. I was just slowly building him up. He was been second, third, fourth many times, but this is the first time he actually won.”

“He is fantastic,” Wordley detailed. “He has a big stride. You can shorten, you can lengthen. He’s scopey, he’s careful, he’s smart. He is all the things that you want in a jumper. He is a big horse even though he is by Hickstead who was only about 15.3/16 hands. He’s about 16.3 and he was a bit weak behind, so it has taken awhile to get him strong and balanced.”

Commenting on Sunday’s course, Wordley noted, “Anthony always builds fantastic courses. It wasn’t overly big, but it was technical enough. He is always very smart at getting the right amount in the jump-off and building things tough enough. It was a good course. It rode really well.”

Wordley was first to go in the jump-off, but ended up being the only clear to take the win. Describing his round, he stated, “Axel covers a lot of ground. I was going slow there for him. He can cover the ground really easily. Going fast isn’t his problem; it is just learning to turn. I have to take the turns a little bit slower than he potentially will be able to next year, but in a straight line he is really fast.”

Wordley will now take some time off for surgery on his ankle, but hopes to be back in the saddle by the second week of the Winter Equestrian Festival in January. He plans to jump Hickstead’s Axel in some of the WEF Challenge Cup classes and hopefully qualify for a few Saturday night grand prixs.

In other competition this weekend, Andrew Kocher and Le Conte got a win in the $10,000 Open Stake class on Saturday. The class saw 36 entries with eight clear rounds to jump-off and three double clears. Kocher and Le Conte had the fastest time of 39.00 seconds for the win. Heather Caristo Williams and Holly Caristo’s Cosmopolitan 30 finished second in 39.75 seconds, and Angela Covert and Utan placed third in 40.45 seconds.

ESP’s Holiday Series continues next week with the Holiday Festival I on December 12-14, 2014. The week will feature a $10,000 Open Stake on Friday, December 12, and the $25,000 Holiday I Grand Prix on Sunday, December 14. For more information, please visit www.equestriansport.com.