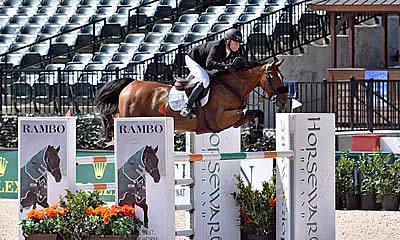 Wordley and Famoso D Ive Z have continued to wow at TIEC, securing multiple victories and accumulating an impressive record throughout the 2016 Spring and Summer Series thus far. With 16 of 32 entries advancing to the jump-off, Wordley commented on the extraordinary competition in the feature class this morning and the consistent flow of the first round, saying, “There are a lot of good horses here for the CSI 4* week and for the first day it was a nice, easy going 1.45m course.

“With that many advancing to the jump-off, there were a couple of really tough inside turns that you had to be a little lucky to make happen. You had to ride the turns well, which weeded out a few competitors. You had to hit them just right or they would slow you down,” he elaborated.

Wordley and Famoso D Ive Z went relatively early in the order to contest their abilities in the jump-off, which pressured Wordley to lay down a speedy time. They were the only pair to finish under the 35 second mark, completing the course with a time of 34.969 seconds.

“I was fortunate to get a good gallop from the beginning, which allowed the turns to come up quite nicely. I was able to make a big move down to the last oxer and not take a feel of my horse’s mouth. Famoso is also very fast, and he was exceptionally good in the corners today.”

He continued to detail his ride in the jump-off, adding, “He could have been quite a bit faster, but he has such a big step that I really had to wait down the five stride line. I even thought if I could redo it again, I would probably do four strides instead of five. Then he could have been close to a second faster with the momentum that would have carried us.”

Wordley and Famoso D Ive Z have been partners nearly ten months now and the Belgian Warmblood gelding (For Pleasure x Chin Chin) is only nine years old, with a bright future ahead. The gelding has won three $35,000 1.45m Horseware Ireland® Opener classes at TIEC and Wordley mentioned that he focuses on competition mileage with this horse in particular to gain more experience.

“I have jumped him in some big classes for just being nine. Now he’s really beginning to step up his game and his education level is great. It doesn’t matter how talented they are; they must have a certain education level and capacity to compete in the big classes. Famoso D Ive Z is really starting to learn his trade and when he knows what he is doing, he is very hard to beat.

“He has a big future that horse,” Wordley noted.