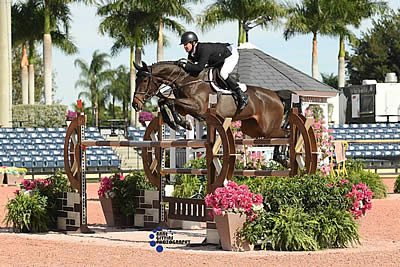 Wellington, FL – November 28, 2018 – Shane Sweetnam (IRL) and Palina De L’Escaut produced a double clear in the $35,000 Dover Saddlery Holiday & Horses Opener CSI 4* to begin 2018 Holiday & Horses competition at Palm Beach International Equestrian Center (PBIEC), conquering their first FEI-level class together with ease and stopping the second-round timers in 30.499 seconds. Samuel Parot (CHI) rode his own Thriller P, a 2004 Swedish Warmblood stallion (Cardento x Lucky Light), to second and double clear in 30.59 seconds, while Daniel Bluman (ISR) rounded out the podium in 31.327 seconds on the speed portion aboard Cartouche, a 2007 stallion, owned by Bluman and Over the Top Stables, LLC.

Forty-five entries tested the course set by Anthony D’Ambrosio (USA), and Sweetnam remarked that the 2009 Hanoverian mare (Perigueux x Gottard), owned by Sweetnam, Paul Tracy, and Spy Coast Farm, LLC, proved herself quite capable of answering the questions posed to the course’s challengers, despite the fact that it was their first FEI class.

“I’ve had her since the end of the summer and she’s a bit green still,” Sweetnam explained. “I knew from the courses I’ve done on her that she’s quite nifty at turning and she’s very careful, so I knew she could do that turn, though I wasn’t sure it would be enough to win the class. It definitely worked out in my favor.”

In particular, the manner in which Palina De L’Escaut attacked said turn made a significant difference in the speed portion of the class. Sweetnam elaborated: “The second half in the speed part, there was an option with a turn that obviously not everybody did and that made a big difference for the win. I think naturally she covers the ground and is quite a quick horse, but I do think she saved two seconds when she turned the way she did, because she literally came off the jump before, turned and looked, and we went straight for it. She zoned in on it perfectly.”

Sweetnam stated that he has been trying horses in Europe frequently throughout the year and first partnered with the mare in Belgium. Right away, he noticed some qualities that he liked. “Honestly, she gives a great feel and she’s very sensitive, but at that stage she was still quite raw,” he admitted. “And she still has little things to learn, but she’s a very quick learner and she’s picking up everything very fast.

“This week, since I’m still getting to know her, she’ll do the [$35,000 Dever Golf Cars 1.45m Classic] class Friday and hopefully she can do a lot more in Florida this year. I definitely think she’ll do a couple Grand Prix classes, but I’m not sure yet [what she’ll do this winter]. When the timing is right, I’m sure she’ll let me know if she’s ready or not,” Sweetnam concluded.

The $100,000 USEF U25 Show Jumping National Championship is ready to begin at the Holiday & Horses Show in the Palm Beach International Equestrian Center’s International Arena. The championship’s fourth edition will run from November 29 to December 2. Athletes between the ages of 16 and 25 will compete in three competitions with fences up to 1.50 meters in height in hopes of claiming top honors.

Twenty-four-year-old Abigail McArdle (Barrington, Ill.) claimed individual bronze with Adamo in 2016 and Chuck Berry 8 in 2017. She started a partnership with Victorio 5, Victorio Equine Group, LLC’s 12-year-old Hanoverian stallion, earlier this year and aims for a top performance in the championship. McArdle and Victorio 5 earned three top-six finishes at the Pennsylvania National Horse Show in October as they continue to develop as a team.

For more information on PBIEC and the ESP Holiday Series, please visit www.pbiec.com.