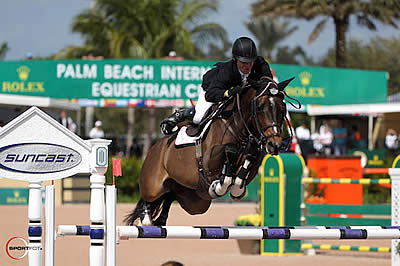 Wellington, FL – February 6, 2016 – Shane Sweetnam (IRL) was the winner of the $35,000 Suncast® 1.50m Championship Jumper Classic with a brand new mount on Saturday during week four of the 2016 Winter Equestrian Festival (WEF). Guilherme Jorge (BRA) set the course for 38 entries in the morning’s 1.50m, with four clear rounds, and a win for Sweetnam aboard The Blue Buckle Group’s Buckle Up. WEF 4 concludes on Sunday, February 7, with a feature class, the $216,000 Ariat® Grand Prix CSI 4*, in the International Arena on the WEF show grounds at Palm Beach International Equestrian Center.

Cian O’Connor (IRL) was first to jump-off in the 1.50m riding Callisto, owned by Ian O’Grady, Philippe de Balander and Ronnoco Jump Ltd. The pair set the pace at 39.70 seconds, eventually settling for second place. David Blake (IRL) and Pine Hollow Farm’s Binkie were next to go, dropping one rail in the short course to finish fourth in 44.95 seconds. Sweetnam and Buckle Up followed with the winning double clear in 38.93 seconds. Last to go, Jordan MacPherson (CAN) jumped into third place with one rail in a time of 39.57 seconds, riding Sved Stables’ Aldine.

Buckle Up is a 10-year-old Dutch Warmblood gelding (Colandro x Caretino) that Sweetnam recently got the ride on.

“It is a new horse. I have only had him two weeks,” Sweetnam explained. “I bought two horses in a syndicate including Lisa Lourie, the Gilbertsons, the Devries, Paul Tracy, and me. We are excited to get such a good result already.”

Buckle Up was purchased from Norwegian rider Ole Meland and has shown in major Nations Cup and World Cup competitions.

“He did a couple of 4* Nations Cups last year and he did the World Cup in Madrid in November, so he was ready to go and do this already,” Sweetnam noted. “He is very careful. I am still getting to know him, but he makes life easy for you. He wants to leave the jumps up, and he is brave. He is nice to ride.”

Commenting on the course and his winning jump-off round, Sweetnam detailed, “I thought Guilherme did a great job. The first round was nice. It was a full 1.50m: nothing stupid, but enough to make us pay attention. Then the jump-off, I was later to go of the four. I saw what Cian did, and I did what he did, just a little quicker. Then I just hoped that the last one did not beat me.”

Buckle Up will jump again in next week’s CSI 5* competition and possibly come out again during week seven.

“I’m just getting to know him at the moment, so I just have to play it by ear, but hopefully we will do big things,” Sweetnam concluded.

Alliy Moyer, of Indianapolis, IN, won three of the four over fences classes aboard Carlson on her way to the Bainbridge Companies Amateur-Owner Hunter 18-35 division championship. Moyer also placed fourth over jumps and first in the under saddle atop the 12-year-old Hanoverian gelding. Vivian Yowan piloted Ransom to the reserve title, placing first, second third and six over fences, and second in the under saddle.

Moyer, a 21-year-old student at the University of Indianapolis, is no stranger to the winner’s circle with her mount Carlson. The pair has numerous championship honors and a USHJA National Hunter Derby win under their belts. As a full-time student, Moyer commutes to Wellington on Thursdays to compete in the Amateur-Owner divisions.

“I have had him for six years, so we know each other really well,” she explained about her longtime partnership with Carlson. “He is kind of like my pet now; I just love him to death.

“He is so good. He knows what he is supposed to do in the ring and he is just great,” she remarked.

Moyer’s strong bond with Carlson was on full display this weekend, beginning with their two wins over fences on Friday.

“The rounds yesterday were really good,” Moyer stated. “He was just spot on and knew what he was supposed to do. Today he was a little extra fresh than what he normally is, but he still jumped great.”

Moyer, who trains with Tammy Provost, spoils her horses with cookies every morning as incentive to perform their best. “They have all been great this week, so I am really lucky,” Moyer said.

Moyer will continue to show Carlson in the Amateur-Owner Hunters during the WEF circuit. She also plans to compete with him in some of the national derbies this year. “But we don’t push him too much. Sometimes he’ll just have a few weeks off. He doesn’t really take much prep. He is just a natural,” she said.