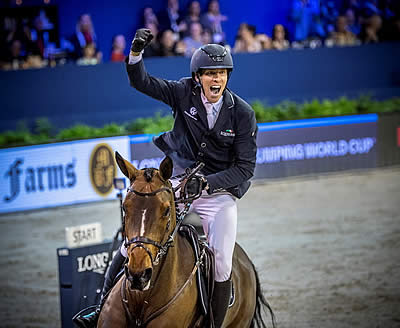 Sweden’s Henrik von Eckermann (37) worked the Dutch crowd into a frenzy and booked his ticket to the series Final with a sensational victory partnering the brilliant mare, Toveks Mary Lou, at the twelfth leg of the Longines FEI Jumping World Cup™ 2018/2019 Western European League in Amsterdam (NED).

Last to go in a breathtaking eight-way jump-off, the rider ranked No. 8 in the world did what seemed all but impossible when pinning Switzerland’s Pius Schwizer (56) into runner-up spot by more than half a second, and pushing Germany’s Daniel Deusser (37) down to third.

“I knew it was all or nothing! When you’re last into the ring you have to believe you can do it – if you have any doubt in your mind then it will never work!” — Henrik von Eckermann (SWE)

This marked the most perfect return for the FEI Jumping World Cup™ series to the Dutch capital city after several years of a break. And amongst those celebrating the Diamond (60th) anniversary of Jumping Amsterdam was The Netherlands’ King Willem-Alexander who, like all the spectators packed into the RAI arena, was treated to an unforgettable afternoon of superb sport.

Only one of the eight Dutch contenders made it into the jump-off which began with a superb second clear for the exciting Portuguese pair, Rodrigo Giesteria Almeida and GC Chopins Bushi. That sole Dutchman, Eric van der Vleuten, was more than a half-second slower with Wunschkind when next into the ring but, as expected, Belgium’s Niels Bruynseels and the ever-ready Gancia de Muze roared into the lead in 35.09 seconds when third to go.

Two rides later, however, Frenchman Kevin Staut and For Joy van’t Zorgvliet HDC out-paced them, only to be immediately overtaken by Germany’s Daniel Deusser with his Madrid winner Tobago Z, who broke the beam in 34.67 seconds. Dutch course designer, Louis Konickx, had set them a superb final test, and both Staut and Deusser risked super-tight roll-backs to the vertical three from home.

But penultimate competitor and former world no. 1, Schwizer, who has been rocketing back up the rankings in recent months, found an even tighter line with his 10-year-old gelding Cortney Cox, and galloped through the timers in 33.34 seconds which looked to have surely settled the matter.

However, when it comes to the will to win, there’s no man quite like von Eckermann. Setting his jaw, he started out like his tail was on fire, and the great 13-year-old mare who has carried him to the third step of the podium at the last two Longines Finals gave him her all. Konickx had ensured that courage on the long run to the final fence would be rewarded, and with the Dutch spectators screaming them on, the Swedish pair threw everything they had at it to break the beam in the astonishing winning time of 33.01.

“I could hear the crowd coming down to the last, so I had to tell myself to stay calm! Mary Lou was lacking a bit of power at that stage so I needed to hold her and not go too much, but she is amazing!” he said.

“She has made me in this sport – I’ve had many good ones along the way, including Gotha, but she is the one that has won the most for me and I’m so very grateful to her owner, Mr Tovek, who has given me the opportunities by keeping a horse like her!” — Henrik von Eckermann (SWE)

As competition began, von Eckermann was lying 19th on the Western European League table, but he has now rocketed up to seventh ahead of the last qualifier in Bordeaux (FRA) in two weeks’ time. He’s missed out on the glorious Longines title by the smallest of margins over the last two seasons, and he’s hungry to try for it again when the 2019 Final kicks off in Gothenburg on 3 April.

“The way to the Final this year has been very stoney, but getting there was my biggest goal for the year. I’ve had two great Finals with Mary Lou before, and I’m so happy to be coming home to my own country to fight for it once again!” the Swedish star said.