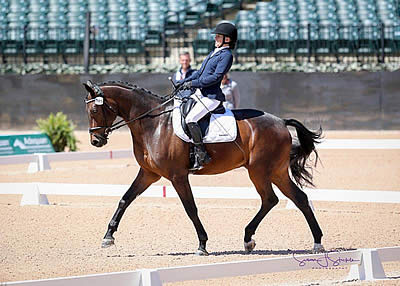 The 2010 Oldenburg gelding (Fidertanz 2 x Don Romantic) is a new mount for Hart and he is new to the world of Para-Dressage too. After only being partnered for a month seemed to be no hindrance for the pair’s performance, as they rode to a comfortable lead in the Team Test – as did Team USA. Hart explained that the duo was a perfect match even from the first ride thanks in part to the gelding’s easy-going, friendly disposition.

“He is just awesome. He’s the happiest soul I’ve ever met. He’s a total lap dog with just kind of an in-your-pocket personality, and a joy to be around. He’s quite green when it comes to showing and he just took all of this in stride,” she said of the exciting atmosphere at TIEC. “I didn’t quite know what his reaction to all this would be, and he was like, ‘It’s cool, it’s 30 degrees and wind is blowing – we’re fine!’ He was so great today.”

Their quick transition into competition did not show in their test, and Hart explained that it’s hard to believe her young mount is still adjusting to Para-Dressage. She commented, “There’s always that learning curve with a new Para-Dressage horse. Even from the very first ride that I sat on him, I was able to get on and he said ‘Yep, this is fine, I can do that for you. Your legs don’t work? No problem. I’m not 100 percent sure what you mean, but I’ll try for you,'” she said of the gelding’s initial response to her. “That first ride is really what drew me to him since we weren’t really looking for a second horse, but he just fell in our laps. He did all that I asked – I usually do start and stop [on a first ride]. He did all the laterals right from the beginning and he was like, ‘Yep, I’ve got you.'”

Both of Hart’s current mounts are new and both are possible contenders for WEG, depending on the selectors’ decision, said Hart. “I’ve only had El Corona Texel for six months now and Moolah we’ve had for one month. My main goal with them is they have the same job, just different sandboxes, and wherever we go they come out and work on consistency and fluidity of the tests, and just gaining exposure for them in a lot of different situations. If we’re so blessed as to look like we’re having both make the team, we would have them [the selectors] pick who they think would be most beneficial. It would really come down to the selectors in that case.”

Roxanne Trunnell (USA) once again took top honors in Grade I, executing a strong test aboard Dolton, a 2012 Hanoverian gelding (Danone I x Londonderry) owned by Kate Shoemaker, to earn a 74.345%. Grade II also saw a return champion in Sharon Buffitt aboard her own Elektra II, a 2005 Oldenburg mare (Radjah Z x Rastar), this time receiving a score of 65.758%. In Grade IV, Angela Peavy (USA) rose to the occasion and rode to a 71.875% aboard Rebecca Reno’s Royal Dark Chocolate, a 2008 Oldenburg mare (Royal Doruto x Don Larino), while Katie Jackson (USA) and her own Diesel, a 2003 Oldenburg gelding (De Niro x Welt Hit II), once again dominated Grade V competition, earning a score of 68.760%.

In the Team competition, the USA took the title with winning members Katie Jackson, Rebecca Hart, Kate Shoemaker, and Roxanne Trunnell, placing ahead of Team Canada in second.

The partnership between Lipp and the 2005 Hanoverian mare (Whitestar x Grand Cru) has been blossoming for some time, but the pair did not contest the international ring until last fall. “We actually purchased her as a four-year-old and I competed her up through the Young Horse Program, which she did quite well in as a four, five and six-year-old,” said Lipp. “For a period her owner was going to ride her, then decided it wasn’t the right match for her, and instead of selling her she said, ‘you do well together, so go on together.’ So now I’m back riding her, and I showed her in a few CDIs, and then unfortunately when I got home she got injured, so she had a period of time off, but thank God she’s back.”

“I would like to thank Kathleen Oldford, the owner of the horse, for giving me the opportunity to ride her. It’s been a really great journey for many years and I feel really lucky and fortunate to have somebody who owns a nice horse and lets me ride it. It’s kind of a rarity.”

The Atlanta, GA, resident was grateful for the short trip up to Tryon, and credits the venue for its hospitality and welcoming feel for competitors. She elaborated, “It’s the nicest venue. I told some of my friends when I first came up here that it is like Disney World for horses and it’s really amazing. It’s amazing and we’re so fortunate to have it. What I love about it too, is that you can come and keep your horses and stay, and never get in your car and never go anywhere. There are great restaurants and it’s just really great. I love that the local community that come hang out and watch – that’s kind of exciting, too.”

After capturing fifth place in the FEI CDI 3* Grand Prix presented by Adequan® on Friday, Lipp and Whitney’s efforts for the Freestyle were rewarded with a 69.765% from the judging panel and after climbing the ladder to first, Lipp is using the win as a motivator for the future. “I’m just going to keep on working at it and getting better,” she explained. “She’s a hot, fiery horse, so the big thing is getting relaxation. Yesterday I had it a little bit better and today was a little bit harder, but it’s an electric place. She tries really, hard, but she’s just a little bit of a nervous horse, so it’s keeping that balance with her.”

“I think what she’s really good at is the power stuff,” continued Lipp, who rode to an upbeat musical freestyle designed by Canadian Karen Robinson. “The extensions, the passage – I think when I come in she gets a little bit taken back, so at the beginning I felt a little stuck, but as the test went on it got better and better. She has really good changes and I made a mistake tonight that was me. Overall, I think she likes the music and likes the atmosphere, so in that way it’s fun.”

Twenty-three entries across five divisions were the inaugural challengers of the Richard Nicoll (USA)-designed track at the White Oak course during the day’s Marathon phase, with four in-hand competition pitting nine entries against the clock through the brand new obstacles.

Chester Weber (USA) guided his team of Amadeus, Asjemenou, Reno, and Ultra to the finish with a score of 109.08, landing in the first-place position heading into the Cones phase on a total of 150.20 penalties. Misdee Wrigley-Miller (USA) and team of Bravour 54, Beau, Bolino D, and Calipso 85 hold the second place position after their quick Marathon run, scoring 122.06 to finish with a 162.05 before Cones, while James Fairclough (USA) sits just behind in third after finishing fast and clean on a score of 109.87 for a total of 163.26, guiding Bento V, Citens, Dapper and Zenden.

“I was really pleased with the course today,” Weber said of the newly constructed layout. “I think Richard Nicoll and the entire team at Tryon here have done a fantastic job. To drive on a track that was formerly a golf course is about like it sounds – it was fantastic. The ground was really nice and consistent and I think the course designer asked quite a few questions. It looks like of the seven obstacles today, we’ll see four or five of them at WEG, and those ones are really the caliber of obstacle necessary and fitting for WEG. I think they used some portable obstacles as they work toward September to fill in some gaps, and I think that was appropriate for today.”

Two of his four horses were just on the national championship team at Live Oak International a month ago, Weber said, so he knew they would go together very well, but this particular combination had never run Marathon together. He added in Reno for Gouveneur, his Dressage right lead, and explained the strategy behind this change:

“The right side I knew really well and then the left wheel horse, I’ve done quite a few shows with and I was really pleased with him today. He’s sort of been in my B group, but he’s looking like he’s trying to come back to Tryon in September. The left lead horse is a really wonderful horse, Ultra, that has lots of experience at championships and things like that. He was an absolute pro out there today. I put in a really nice horse, Reno, who’s sort of my Cross-Country leader that I plan to drive here in September because I wanted to see what he’s like on this track and learn a little bit about him. I took out a seven-year-old horse named Gouveneur that we’re producing kind of behind this group for a career hopefully after Tryon, but to be honest he was steady as a rock and we may even use him tomorrow in the Cones to give him a little more experience.”

Weber reflected on how he’s planning to attack the Cones phase. “I guess my plan always is to drive double clear – clear without any faults and also without any time faults – so that’s kind of my plan. I’ve seen the course a little bit from the side looking on, which is sometimes a little bit deceiving, but Richard Nicoll usually builds a course that has an element of flow, which works well with my style of driving. I like sort of one high tempo instead of a lot of speed changes and things like that. Some drivers really go forward and come back, forward and come back, but I like to maintain one even flowing speed throughout the whole course.”

It’s his first time in Tryon and his first peek at what the WEG will hold, and Weber had glowing reviews to share about the venue. “Without a doubt, the facility is bar none one of the nicest facilities I’ve been to in the world,” he began. “There’s certainly a lot of construction going on. The civil engineer and the building team here are going full speed, it seems like 24 hours a day, and I’m really impressed. But what’s completed already is really nice and super high quality, so I’m really looking forward to September and I feel like a prideful American.”

As for Weber’s plans looking at the next few months before the arrival of WEG in September, he commented on the next stop on their competition tour. “Our next event is at Royal Windsor – that’s the first weekend in May, at Windsor Castle, just outside of London, and after that we’ll likely be in Saumur, then Aachen, and then Beekbergen, and then after Beekbergen the horses will come home to Florida and acclimate a little bit to the heat and humidity, which we could have here in Tryon. We’ll do some acclimation, make sure we’re all polished up, and then we’ll come up here and hopefully we get something done!”