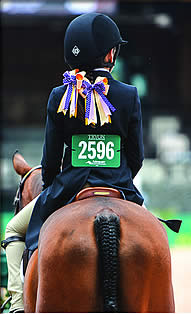 Mill Spring, NC – June 21, 2018 – The Tryon International Equestrian Center (TIEC) Summer Series is excited to present the return of the second annual Pony Spectacular as part of Tryon Summer III competition hosted June 27 through July 1 at the venue, which will include fun entertainment and events for competitors and their families, as well as spectators and fans. The week is a fantastic way for riders to prepare for competition at the USEF Pony Finals presented by Collecting Gaits Farm in a big arena atmosphere.

The second annual Pony Spectacular will be highlighted by the $10,000 USHJA Pony Hunter Classic in the George H. Morris Arena at Tryon Stadium beginning at 3:00 p.m. on Friday, June 29. The winning combination from the $10,000 USHJA Pony Hunter Classic will be honored during the $70,000 Adequan® Grand Prix CSI 2* on Saturday evening in front of an enthusiastic “Saturday Night Lights” crowd. The concept of the Pony Spectacular was created to help give competitive pony riders additional experience in a major competition atmosphere.

Pony Divisions will be hosted in the George H. Morris Arena throughout the day on Saturday, featuring twelve classes and several pony jumper classes will be highlighted as well, giving youth the chance to showcase their talents in TIEC’s biggest arena.

Another new addition to the Pony Spectacular is a stall-decorating contest that will be held throughout the week, with a winner will be crowned through votes on Instagram. The TIEC team will host a special Instagram live session on Friday, June 29, and the contest is a great way for barns to show their spirit and excitement for the Pony Spectacular. The theme of the stall decorating contest is “Welcome to Summer” with one contest winner being selected by a group of judges to win VIP seating for six in the Legends Club for the movie showing of Moana and six pool passes to Cleghorn Golf & Sports Club.

New to this year’s Pony Spectacular lineup is a “Make Your Own Bow” station at the Movie Night and Ice Cream Social Pajama Party in Legends Club on Friday, June 29, at 7:00 p.m. following the $10,000 USHJA Pony Hunter Classic. Competitors can craft personalized show bows from provided materials or bring their own, while Moana plays on the Jumbotron in the George H. Morris Arena. Popcorn, ice cream and toppings will be provided for competitors on a first come, first serve basis.

Free admission and seating for the general public will be open in the George H. Morris Arena at Tryon Stadium and concessions will be offered throughout the evening including movie theater favorites like popcorn, cotton candy, and lemonade.