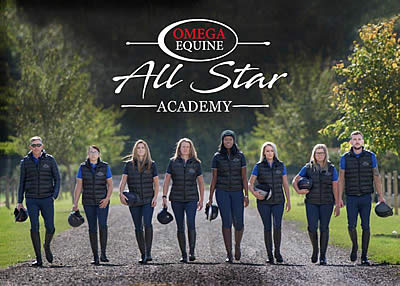 Join H&C TV and watch the first two episodes in season three here before the third episode premieres on Sunday evening. Join the conversation by using the hashtag #OEASA and let us know what you think of this week’s show!

Filmed in Gloucestershire, U.K. at the Talland School of Equitation, the show, described as a cross between The Apprentice and Pony Club camp, stars eight new recruits and their horses with Pammy Hutton and her son Charlie acting as the contestants’ mentors and judges.

The finalists face a series of tough tasks in each episode under the watchful eyes of the judges. However, this isn’t just a riding competition. The judges are also looking for well-rounded stars who impress with their personality, media savvy, tenacity, and will to learn, as well as their skills in the saddle.

As always, the Omega Equine All Star Academy boasts a fantastic lineup of guest judges, with some of the leading names in the equestrian industry, including eventer Harry Meade, super groom Alan Davies, and top show jumper Geoff Billington.

Media skills are just as important as horsemanship in the Omega Equine All Star Academy as all of the contestants will go on to share video blogs of their life after the academy in The All Star Diaries on H&C TV.

Ultimately, the winner of this season’s Omega Equine All Star Academy will receive a generous one-year sponsorship and products from Omega Equine plus the chance to co-present an episode of Rudall’s Round-Up with Jenny Rudall on H&C TV. All eight finalists will also be given over £1,000 worth of equestrian products.