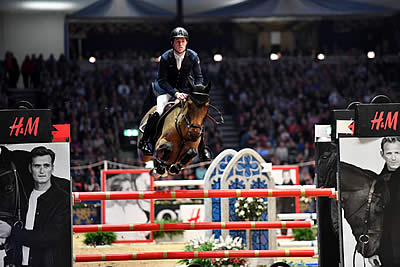 Scott Brash thrilled the packed house at Olympia, The London International Horse Show, with a virtuoso performance aboard the fleet-hoofed mare Hello M’Lady to snatch the Longines FEI World Cup™ qualifier presented by H&M by the tiniest of margins.

There were double celebrations when Ben Maher, the last British rider to win this prestigious class, back in 2011, finished second on another mare, Diva ll, by just 0.12 of a second.

On H&M Sunday at Olympia, it was appropriate that Belgian rider Nicola Philippaerts, whose father, Ludo, won this class back in 1988, was third on H&M Harley vd Bisschop.

Thirteen riders from eight nations went through to Kelvin Bywater’s ingenious jump-off track which hinged on getting the sharp angle back to a double on a blind turn and then clearing the upright fence on a curving galloping line.

“Kelvin [Bywater, course-designer] did a great job,” commented Scott. “It was big and technical but, nowadays, the standard is so high that there are horses that will just skip round.”

Only five of the 13 riders achieved a double clear and German maestro Marcus Ehning, who could have spoilt the British party when last to go on Comme Il Faut, racked up a surprising 20 penalties.

US rider Laura Kraut, whose partner Nick Skelton was already en route to Birmingham for BBC Sports Personality of the Year, was fourth on Zeremonie and 61-year-old John Whitaker rode superbly to finish fifth on Ornellaia while crowd favourite Lorenzo De Luca finished sixth for Italy with one rail down on Limestone Gray.

Olympia represents the eighth of 13 legs in the Longines FEI World Cup™ and Scott’s win elevates him 26 places to sixth in the standings and within sight of a place at the final in Omaha, USA, in April.

“I think I will target the FEI World Cup™ Final this year,” revealed Scott. “I don’t very often, because there’s such a full calendar, but I’m very fortunate to have a strong team of horses, some of which are back from injury now – including Hello Sanctos [his Olympic gold medallist] and Hello M’Lady.”

Of Lady Kirkham’s agile nine-year-old mare, Scott commented: “She’s sharp, an exceptional jumper and very much one for the future. It was very special to win in front of a home crowd.”

Ben Maher, the first rider to go clear in the jump-off, could perhaps consider himself hard done by, having set such an exacting standard, but his mare was returning to form and he said simply: “I would have been happy with sixth, quite honestly. Diva loves this show and jumped brilliantly; it’s just great to have her back. Congratulations to Scott – I couldn’t have done any more.”