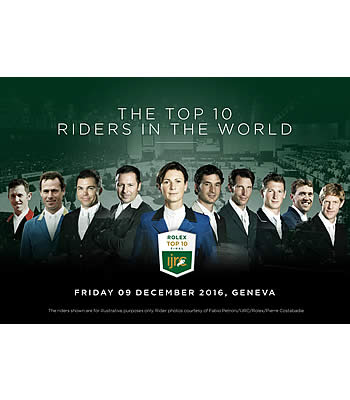 30 November 2016, Geneva, Switzerland – The 2016 global equestrian season comes to a close in scintillating fashion with the third equestrian Major of the year hosted by CHI Geneva.

The 56th edition of this prestigious show takes place from 8-11 December 2016 in Rolex headquarters’ pristine home city of Geneva. The Swiss indoor show has been voted the world’s best show jumping event for the 8th time by many of equestrian’s greatest riders and Rolex is proud to have been the presenting partner since 1996.

As the only one of the three Majors that comprise the Rolex Grand Slam to be hosted indoors, CHI Geneva is unique in its setting and atmosphere, creating an entirely fresh challenge for riders and horses alike.

CHI Geneva builds to a climax on Sunday 11 December with the Rolex Grand Prix, one of the three Majors that together form equestrian sport’s most sought-after award, the Rolex Grand Slam of Show Jumping.

As one of the most renowned competitions in the show jumping season, winning the Rolex Grand Prix at the Palexpo stadium in Geneva will require supreme courage and immaculate timing. With an imposing course set to defy the world’s foremost riders, an enthusiastic and appreciative crowd creates a cacophony of noise to complete an atmosphere unparalleled in equestrian sport.

To date Scott Brash is the only winner of the Rolex Grand Slam of Show Jumping, the sport’s greatest prize. By winning the three equestrian Majors in succession in 2015, a feat even more impressive considering it was achieved on the same horse, Brash secured his place in equestrian sport’s illustrious hall of fame.

After winning the 2016 CP ‘International’, presented by Rolex, in Spruce Meadows, Brash arrives to Geneva as the live contender for the Rolex Grand Slam, once again in a position to take home the ultimate prize. He will need to demonstrate passion, determination and exceptional performance to continue his quest towards a second Rolex Grand Slam of Show Jumping title.

“To win the three equestrian Majors back to back, and accomplish a second Rolex Grand Slam of Show Jumping title, would be incredible. It’s what every rider wants to be a part of. I am delighted to be back on track and am looking forward to attempting to take the next chapter in this extraordinary challenge.”

Having triumphed in 2014 aboard Hello Sanctos, Brash knows exactly what is required to win CHI Geneva, putting him in an excellent position to compete against his fellow equestrian elite.

The last three victors in the Rolex Grand Prix at CHI Geneva have all been Rolex Testimonees, underlying the exceptional talent of this group of supreme athletes.

Steve Guerdat has enjoyed the most successful record at CHI Geneva, winning the title in 2006, 2013, and most recently in 2015. The Swiss favorite will be looking to return in 2016 and contend for his fourth title. The champion equestrian athlete will be riding Nino des Buissonnets, in what will be the gelding’s last competitive appearance and third CHI Geneva title if the pair win. It seems only fitting that Guerdat will be retiring his prize horse at his home show.

The 2008 champion, Eric Lamaze, will be looking to add a second Geneva title to his extensive list of titles when he enters the Palexpo arena riding Fine Lady 5.

Kevin Staut, who was victorious in 2010’s jump-off, and Great Britain’s Scott Brash complete the list of Rolex Testimonees who have triumphed at the world’s premier indoor equestrian show.

Winning his first ever Rolex Grand Prix at Geneva aboard Voyeur would be a superb way for Kent Farrington, current world number four, to complete a victorious 2016 season in which he won Team silver at the Rio 2016 Olympic Games.

Meredith Michaels-Beerbaum, arguably Germany’s greatest show jumper of all time, has one of the finest equestrian resumes in history and with the Rolex Grand Prix missing off that impressive list she will be hoping to make amends riding her gelding Fibonacci 17.

The Rolex International Jumping Riders Club (IJRC) Top 10 Final is one of the highlights of the CHI Geneva programme. Held on Friday 9 December 2016, this exciting competition brings together the world’s best horse and rider partnerships in one of the most prestigious classes in the global equestrian calendar.

With only the world’s Top 10 ranked riders invited to participate, the roster of the Top 10 Final is unrivalled in world equestrian sport. Winning the coveted title requires impeccable precision and timing.

Alongside Kent Farrington, Rolex Testimonees Eric Lamaze, Steve Guerdat and Kevin Staut have also qualified to compete in the 2016 Rolex IJRC Top 10 Final. Rolex has proudly supported the IJRC Top 10 Final since it’s inauguration in 2001 and five of its equestrian Testimonees have claimed the sought-after trophy: Rodrigo Pessoa (2003 and 2005), Meredith Michaels-Beerbaum (2004 and 2006), Steve Guerdat (2010), Scott Brash (2014) and Kent Farrington in 2015.