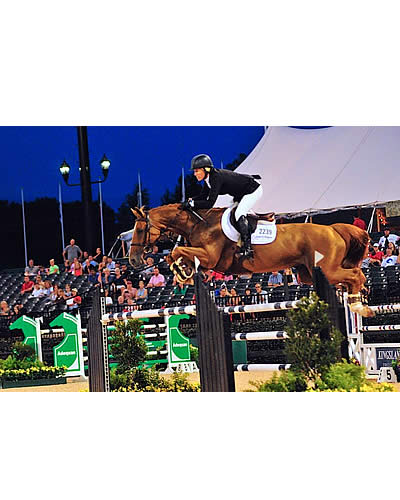 Mill Spring, NC – July 4, 2015 – Schulyer Riley (USA) and Dobra De Porceyo captured the biggest win of the duo’s career together in the $127,000 Ariat® Grand Prix FEI CSI 3* under the lights in the George H. Morris Arena in the Tryon Stadium at Tryon International Equestrian Center (TIEC). Riley and Dobra De Porceyo stopped the jump-off timers in 45.129 seconds as the only double-clear round of the night, beating out Angel Karolyi (VEN) and Venus, who finished in second place. Filip De Wandel (BEL) and his mount Gentley rounded out the top three with a time of 46.158 seconds and four faults. Competition continues at TIEC tomorrow with the $15,000 Under 25 Grand Prix beginning at 8am. The Tryon Summer Series will continue through Sunday, July 19.

Riley and Dobra De Porceyo took a methodical approach to Saturday night’s class, designed by Hector Loyola (PRI), as both tracks were big and technical. Riley cruised through the first round of competition and laid down the only clear round in the jump-off to secure the win.

“I walked the course and thought it was quite difficult for the level and horses can always react differently under the lights. I was confident with Dobra because she’s been here and performed very well and she has quite a bit of experience at night,” commented Riley. “I felt like she was a little bit high in the beginning, especially over the triple bar, which was not my favorite part of the ride, but then we just smoothed it out and it was like nothing for her. She jumps everything so easily.”

Entering the ring for the jump-off, Riley knew that she needed not only a fast time, but a clear round as the skilled and notoriously fast Karolyi was following her in the order of go.

“I knew that I had Angel behind me and he was the one I was the most concerned about because he is extremely fast. He did go faster than me, but I was just a bit luckier tonight,” said Riley. “I’m really so happy right now. I’ve had a few jump-offs where I try to go fast but get conservative with her at the end and I really let her open up to the last jump. I’m thrilled. She was just amazing.”

The win capped a dry spell for Riley, who has waited patiently for another top finish at the Grand Prix level. Their win also marked Dobra’s first win in a Grand Prix as the 2006 CDE mare (Action Breaker x Sanne) competed in her first Grand Prix last fall.

“This is my first Grand Prix win in probably two or three years and it’s the first Grand Prix that she’s ever won, so this is a very exciting and special night for us. She’s just nine and we did her first Grand Prix last fall at indoors at Kentucky National. She really stepped up this past winter in Florida,” noted Riley. “We just know each other so well the hardest part is trying not to tell her too much. We try to keep a very clear and smooth communication, and she always looks to do the right thing for you.”

The mare has been under Riley’s guidance for most of her career, as she purchased her as a difficult and moody six-year-old. The duo formed an inseparable bond, which was evident to the crowd tonight, as they made easy work of two technical tracks.

“She was tough. She was really difficult at the beginning and she’s a chestnut mare,” she smiled. “I took my time with her and let her know that we were going to work as a team and I was never going to try and overpower her. We channeled all of her fiery energy into what I have now. She’s probably one of my most favorite horses that I’ve ever sat on.”

Riley has stationed herself at TIEC for the majority of the Spring and Summer Series, as the venue is offering East Coast riders the ability to contest FEI competitions throughout the season, which is something the area desperately needed, according to Riley.

“I’m completely blown away and impressed by how they have developed this venue. It was built for the top of the sport and it’s what the sport is asking for right now,” she explained. “There was a big void on the East Coast for FEI competitions with great prize money and atmosphere, and they’ve absolutely delivered. For some of the riders that aren’t in the financial situation to travel to Europe or Calgary, they’ve made top sport feasible for everyone.”

Trialing closely behind Riley during the prize-giving ceremony, with a beaming smile, was groom of six-and-a-half years, Jesus Pimentel, the main caretaker of Dobra De Porceyo. Pimentel was thrilled with the team’s win tonight and was honored to receive the second Groom’s Initiative Award at TIEC.

“I think it’s amazing what they’re doing now with the grooms because usually most people don’t see everything behind the scenes. We really enjoy doing this job and it is great to be recognized. It means so much to me. I feel so honored,” said Pimentel.

The relationship he maintains with Dobra is something very special and he rarely leaves the mare’s sight. Grooming as a professional for more than eleven years, starting at the young age of 16, Pimentel has become a mainstay at Riley’s Wolfstone Stables.

“She’s been amazing and we’ve gotten really close in the top ribbons, but tonight feels really special. She’s the sweetest horse ever. When you walk with her she always makes faces at you and I love her personality,” he smiled. “I love this job. I love working with the animals and I think that’s why I always try to do my best because I really care about them. They’re my family.”

Tryon Summer 2 will conclude tomorrow, Sunday, July 5, with the highlight $15,000 Under 25 Grand Prix in the George Morris Arena in the Tryon Stadium beginning at 8am. For more information on TIEC and for a full list of results, please visit www.tryon.com.