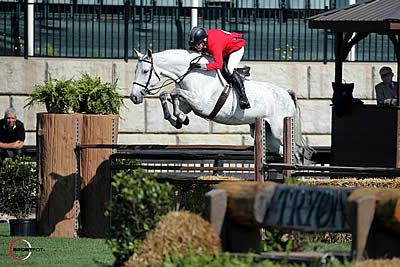 Mill Spring, NC – June 9, 2017 – Schuyler Riley of Wellington, FL and Cleopatra’s Smile, owned by Wolfstone Stables and Sales Inc., was the winning pair in the $25,000 USHJA International Hunter Derby at the Tryon International Equestrian Center (TIEC). The duo paved the way after the first round with a combined score of 181.5 and turned in another strong performance in the handy round, earning a score of 187 for a total score of 368.5. Liza Boyd of Camden, SC and O’Ryan, owned by Stella Styslinger, secured the second place honors with a two round total of 367, while Jennifer Hannan of Wakefield, RI and Olympic Fire, owned by Roger Smith, rounded out the top three with a two round total of 365.

Riley and Cleopatra’s Smile were sitting in first place after the first round, returning last to test their abilities in the handy. Navigating the handy round with precision and beauty, the duo ended the day with a blue ribbon. Having only been partnered as a team since this past March, Riley was thrilled with the mare’s performance on the large derby field.

“She is new at this, so I tried to take as much time as possible to get to the first jump to allow her to take a breath by the time I was there. Everything rode exactly like I planned it,” Riley detailed.

Cleopatra’s Smile, a 9-year-old-mare, was competing in the jumpers when Riley imported her from Europe and knew the horse was destined to be a derby horse. “Whenever I go to Europe to try a horse to be a hunter, I let them loose to see what they do. A lot of them don’t understand, but she got it by the second jump. She is really smart and really easy,” she explained.

“I decided to bring her to Tryon because I just love her character. I think she has just blossomed because her character is so good. Her personality is just like a Labrador Retriever and as you watch her expression going around the course she zones in on the jump and her ears go forward. She really enjoys it,” she said.

Well-known in the jumper ring, Riley is loving her time participating in the hunters and is excited to continue contesting opportunities with Cleopatra’s Smile.

“For me, there is a lot more riding that has to go on. It is a lot more technical and you really have to be able to feel the horse because you are out there for a long time. You have to know what is happening underneath you and ride each jump separately. You also have to have a good sense of communication with the horse and they have to trust you. For me, I have as much fun in the derby field as I do in the jumper ring.”

“I am not used to looking at the jumps so far away. I saw the distance fifteen strides out and I was thinking to myself, ‘You can’t see a distance that far away,’ but it all worked out and was a lot of fun,” Riley added.

Standing out in the Team USA red show jumping jacket, Riley touched on her choice of outfit, saying, “I don’t own a shad belly and never have. Even as a junior I didn’t own one. I was reading the derby rules for proper attire and it says that if you have ridden for a U.S. team and have a red coat, you are allowed to wear it, so I thought why not? It goes with my grey mare and a blue ribbon!”

Riley looks forward to the future with Cleopatra’s Smile and she was very thankful of the opportunity to ride on the Grass Complex at TIEC, saying, “I just really appreciate that Tryon has made such a big effort to make the jumper venue special, but also with hunter events too. The footing rode fantastic and we appreciate all of the effort that the management and organization has made into putting these types of classes on.”

Sweetnam and Cyklon 1083, a 2001 Swedish Warmblood (Cardento x Cortus), owned by Spy Coast Farm LLC, have been frequent visitors to the winner’s circle at the TIEC. The track set by Alan Wade (IRL), who has built impressive courses throughout the week at the TIEC, tested the horses’ speed and agility.

“Alan [Wade] set a really nice track today. The way the course was set made everyone do the same route and there was not a big gap in any of the times. I was early in the order so I went as fast as I thought I needed to, to win the class and my time held up.” Sweetnam described.

Giving credit to his longtime partner Cyklon 1083, Sweetnam commented, “Cyklon is naturally a quick horse and I made a tidy roll back to fence four and fence eight. I think that made the difference and how I won the class.”

Sweetnam spoke highly of the impressive stallion, Cyklon 1083, and his ability to win all of the world, as well as here in North Carolina at TIEC. “He has won everywhere. He is sixteen years old now and I have had him for six years. When he comes out to compete he always has a chance to be at the top. He is one of my favorites. He can do everything. He is a great horse and his record speaks for himself.

“This is a great facility, and the atmosphere is always fantastic. There is a great competition here this week and Alan [Wade] will for sure build tough enough tomorrow night. It will be a great class for the spectators,” Sweetnam concluded.